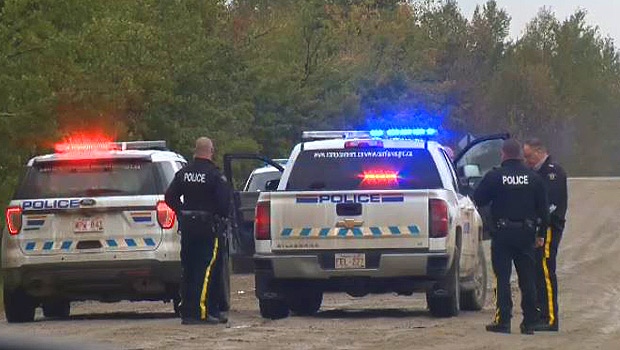 Four people are facing charges after armed robberies in the Lac La Biche area and a pursuit around Wetaskiwin early Friday morning.

A 16-year-old male from Lac La Biche is facing eight charges, including robbery with a firearm, firearm offences, and breach of probation, police said.

Kikino native Dusty Hardy, 23, and a 17-year-old male from Beaver Lake were charged with robbery with a firearm and joyriding, RCMP said.

Monias and one youth are in custody, and Hardy and another youth were released with conditions to appear in court, police said.

A 33-year-old man and an 18-year-old woman were also arrested after the incidents, RCMP said Friday, but they have not been charged.

The names of the youths are protected under the Youth Criminal Justice Act.

RCMP responded to a shots fired complaint in Lac La Biche at approximately 10:30 p.m. Mounties said a vehicle with several occupants drove into a parking lot near an apartment building and fired two shots towards another pair of vehicles.

The three vehicles left the parking lot and RCMP could not locate them.

At 1:30 a.m., Redwater RCMP responded to an armed robbery complaint. The description of the vehicle matched the suspect vehicle involved in the shooting in Lac La Biche.

RCMP said several of the people in the vehicle demanded money from a person outside a service station in Redwater, and one of the suspects allegedly pointed a gun at the civilian. The person refused to comply and the suspects fled, RCMP said.

Redwater RCMP located the vehicle and briefly chased it and terminated the pursuit.

Police were alerted of another armed robbery near Redwater. A man stopped roadside in his vehicle was allegedly confronted by several armed suspects and shot in the arm as the suspects attempted to get into his vehicle, RCMP said.

They fled and the victim was taken to an Edmonton hospital.

Edmonton police located the suspect vehicle, and along with Leduc and Wetaskiwin RCMP, they chased the six suspects.

RCMP said the vehicle was abandoned north of Wetaskiwin, and police began to track five suspects who they eventually arrested.

Police encountered a second vehicle associated with the other suspects at a perimeter checkpoint, and an officer discharged his arm. The suspect was taken into custody an ASIRT is investigating.

Both vehicles were determined to be stolen from Caslan and Devon.