City of Edmonton work crews are preparing to salt and sand roads when rain freezes over.

While temperatures in the Edmonton area were around seven degrees Friday, they were expected to plunge to -7 C overnight, coinciding with a winter storm that will blanket the city in up to 20 centimetres of snow. 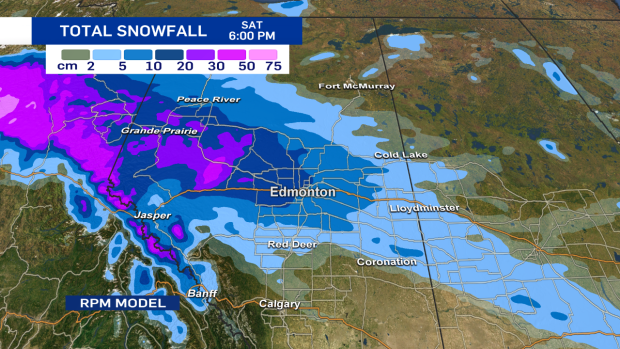 The result? A slick, snowy mess that has the potential to cause commuter chaos.

"There is a lot of rain in the forecast," said Andrew Grant, the city's general supervisor of infrastructure, field operations. "With the temperature dropping and all that rain freezing, turning into ice, those are things that we monitor throughout the night and into tomorrow. All of our teams are prepared for that, and it's just about using the right tool for the jobs."

Those tools will not include calcium chloride, a controversial de-icing agent used on Edmonton streets last year as part of a pilot program.

Because of concerns over how the chemical impacted surrounding ecosystems, council recently voted to nix it from being used this year.

This isn't really an event where we would've used calcium chloride, due to the rain leading into the storm. That was one tool out of many that our operation uses, and we're still equipped with a number of different tools," he said.

Crews are hoping to control most of the snow accumulation with salt and sand, but Grant said plows are ready if needed. Additional city workers will also be standing by overnight as temperatures drop.

Plows will focus on clearing arterial and priority one roadways within 48 hours of a major snowfall, but will also work through residential roads and alleyways.

The most important message to drivers is that they should take it nice and slow on the roads, says Ryan Lemont, manager of driver education for AMA.

"It's kind of a one-two punch. You have the roads that are going to start freezing up over time as well as a fresh coat of snow on top," he said. "It's really about being vigilant, planning ahead, even checking online for our road report conditions."

While drivers are usually urged to keep a three-second distance from the vehicle in front of them, snowy, icy conditions call for a four-to-six-second delay.

"The other thing is speed. So the greater the speed, the greater the distance it'll take to stop, so slow down and give yourself a lot of time to get where you're going," said Lemont.

Drivers in rural areas should also be aware that those roads can freeze faster than high-traffic urban areas.

If you hit black ice, the best thing to do is look where you want to go and steer in that direction, then use firm, steady pressure on your brakes.

And of course, winter tires are recommended.

"If you haven't already got some winter tires put on, the best time to do it is right now," said Lemont. "It'll just give you that added traction and stability."

Environment Canada also issued winter storm and snowfall warnings for much of western and central Alberta, including the Edmonton area, due to low-pressure systems coming in from the Pacific.

The department warned of hazardous conditions, especially in the northwest part of the province.

East of Grande Prairie, slippery conditions resulted in backups on westbound Highway 43 near the Smoky Hill. RCMP said several tractor trailer units were unable to make up the hill and slid off the roadway. No injuries were reported.

Highway 43 was fully opened again before 5 p.m., although officials advised drivers to expect delays given the poor conditions and reduced visibility.

A total of 30 to 40 centimetres of snow was expected to fall in the region.

@joshclassenCTV @ctvedmonton Just my sister skating down her Range Road east of Grande Prairie. So much rain overnight and into the morning. pic.twitter.com/XU4D5ou5YR

For the latest warning and forecasts, visit the CTV News Edmonton weather page.