EDMONTON -- Residents of the West Meadowlark Park neighbourhood gathered up their own lawn mowers Wednesday evening to cut grass that City of Edmonton officials said they can't afford to maintain this year.

"The city is not keeping up their end of the work. So somebody's got to do it," Jim Wells said.

Wells believes the grass in the community pocket park has never been so long, at least not in the 28 years he's lived there.

CTV News Edmonton measured the grass, with some blades over 16 inches long. White dandelions covered the park, which is about four city lots in size. 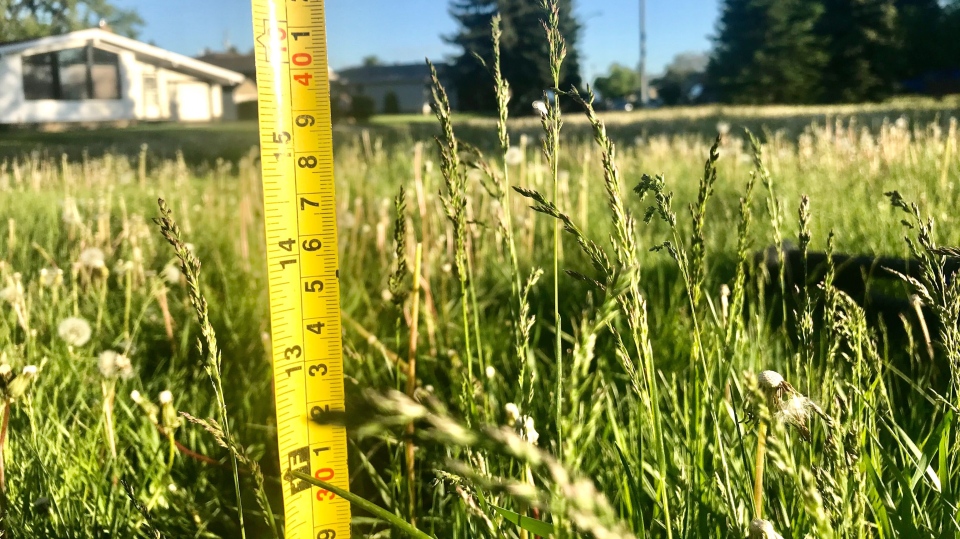 Paul Hanlon, a spokesperson for the city, told CTV News Edmonton that pocket parks won't be cut at all this year.

"It is frustrating. Cause we’re watching kids run through this stuff, and the dandelions are going onto everyone's lawns," Nathan Gullion said while helping Wells cut the grass.

Guillion has four kids who play in the park almost everyday, and said his wife called the city to complain, but nothing was done.

"Someone has to [cut it]. So I guess us as a community have to do it," Guillion said.

'We Have Limited Money'

The city councillor for the area, Andrew Knack said Edmonton simply can't afford to cut the grass like it used to.

Temporary grass cutting staff was not hired this year, meaning there's less than half as many mower operators as usual.

The city was hoping to cut parks every seven days, but because of financial troubles due to the COVID-19 pandemic, that’s been extended to every 21 days.

"We don’t have the financial ability to reassess. That contingent alone is in the tens of millions of dollars and so that money isn’t available, unless we went back and raised taxes," Knack said.

Knack called the situation "frustrating" but defended the council's decision to focus what money it does have on safety issues like potholes and other maintenance that is not "cosmetic."

Back in West Meadowlark Park, Jim Wells called the state of the city-owned green areas around his home "pitiful," but acknowledged other people are facing bigger problems right now.

"They're laying off people so what are you gonna do?" Wells sighed.

Hanlon said the lack of maintenance this year will be "noticeable," although he added that "premier parks and sports fields will continue to be mowed to regular standards."