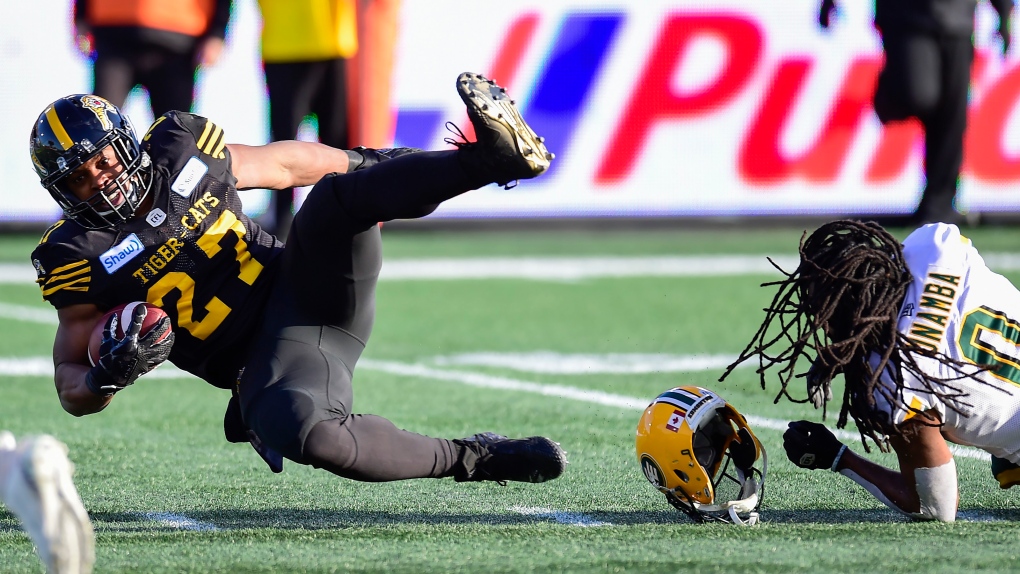 HAMILTON -- Dane Evans threw for 386 yards and a TD in his first CFL playoff start, leading the Hamilton Tiger-Cats past the Edmonton Eskimos 36-16 in the East Division final Sunday afternoon.

Hamilton, which finished the regular season with a CFL-best 15-3 record, advanced to its first Grey Cup game since losing the '14 final to Calgary. The Ticats last won the title in '99, the league's second-longest drought.

Hamilton will play either the Saskatchewan Roughriders or Winnipeg Blue Bombers in the Grey Cup game in Calgary next Sunday.

Evans finished 21-of-36 passing with an interception. More importantly, he improved to 10-2 as Hamilton's starter before a sun-drenched Tim Hortons Field-record sellout of 25,177 that was predominantly clad in Ticats' black and waved gold rally towels throughout.

Edmonton had a glorious chance to make it interesting when Godfrey Onyeka recovered Luke Tasker's fumble at the Hamilton 36-yard line 2:30 into the fourth. But the Eskimos had to settle for Sean Whyte's 30-yard field goal at 5:11 to cut the Ticats' lead to 28-13.

David Watford cemented the Hamilton win with a two-yard TD run - his second of the game - at 8:09.

Edmonton starter Trevor Harris, facing Hamilton for the first time this season, was 29-of-41 passing for 319 yards with a TD and two interceptions while being sacked three times. Harris completed 36-of-39 attempts - completing a CFL-record 22 straight - for 421 yards and a TD in last weekend's 37-29 East Division semifinal win over Montreal.

Harris had a CFL playoff-record six TD strikes for Ottawa in the '18 East Division final.

Edmonton was attempting to become the first crossover team to reach the Grey Cup since the concept was introduced in 1996. West Division teams are 0-5 all-time in the East Division final, with the Eskimos dropping to 0-3.

Crossover teams have played in 17 games and are 5-12 all-time with all the victories coming in the semifinal round (5-7).

Hamilton improved to 10-0 at Tim Hortons Field and became the eighth team in CFL history to finish the regular season unbeaten at home. The Ticats become the fourth such squad to reach the Grey Cup but first since '09 Montreal Alouettes.

Lirm Hajrullahu's 34-yard field goal at 10:45 of the third increased Hamilton's lead to 28-13. It came after Edmonton surrendered the safety at 7:03.

Hamilton put Edmonton into a real bind when Hajrullahu's 41-yard field goal on the final play of the second quarter staked the Ticats to a 23-13 half-time lead. The Eskimos were a dismal 1-9 this season when trailing at the half.

Harris, after completing his first 22 passes - a CFL playoff record - in the first half of the East Division semifinal, was 15-of-20 for 158 yards with a TD and interceptions as the Eskimos had the ball for over 17 minutes through two quarters Sunday.

Daniels pulled Edmonton to within 13-7 with a 21-yard TD grab to cap an eight-play, 75-yard drive at 2:34. But Hamilton countered with Banks' acrobatic 47-yard touchdown catch at 4:13 to go ahead 20-7 as the Ticats had scored on four straight possessions.

Watford scored on third-and-two at 7:55 following Frankie Williams' fumble recovery and return to the Edmonton 31-yard line. Then following an 11-yard Hugh O'Neill punt - that went for a one-yard net due to penalty - Hajrullahu connected on a 19-yard boot at 13:35.

This report by The Canadian Press was first published Nov. 17, 2019.