EDMONTON -- As the province continues to consult with doctors on how fees are collected, clinics have created a petition against the proposed changes.

In late November, Health Minister Tyler Shandro told the Alberta Medical Association about his government's intention to save money in the health care system.

The proposal includes 11 recommended changes to the way doctors are compensated by Alberta Health.

"The analysis showed that 85 per cent of the decline in fee revenue would happen to family practice," said Mel Snihurowych, the Chief Administrative Officer of Synergy Wellness Centre.

The Chief Administrative Officer for Synergy Medical Clinic in Sherwood Park has posted signs at the business asking patients to sign a petition against the proposed changes.

Snihurowych says the government typically discusses changes with the AMA, but "this was a bit more heavy handed, saying 'this is what we are going to do.'"

The main issue for physicians, according to Snihurowych, is the proposed change to only allow doctors to bill for the 10 to 15 minutes they spend face to face with a patient.

"When a doctor spends 15 minutes with you, that's not all the time he ever spends on anything," Snihurowych said. "There's labs, there's letters, there's forms. Everything else that has to be filled in."

Right now, doctors can be compensated for that extra work, but under the proposed billing structure, they could not. 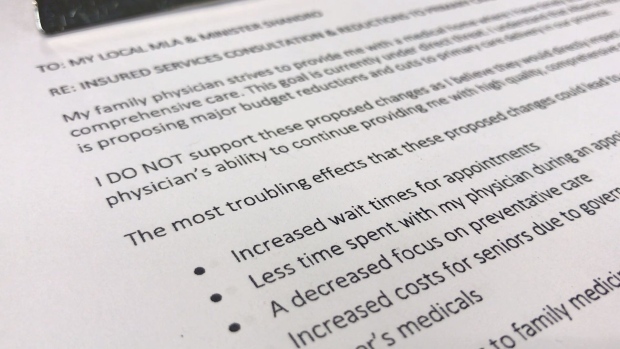 Synergy isn't the only clinic collecting signatures. Staff at many medical facilities are asking patients to speak up, some providing a pre-written letter to Minister Shandro that claims timely access to comprehensive medical care is "under direct threat."

The changes were initially set to take effect Feb. 1, but the Shandro deferred implementation last Tuesday and no new date has been set.

Snihurowych believes many family health clinics won’t be able to stay open if the changes happen as proposed.

"It's easy to cut something today, but the effects are felt years down the road."

The government said that despite the changes, physicians would still be paid more than those in other provinces.

"Alberta doctors are paid 24 per cent more than in BC, Ontario, and Quebec. An Alberta physician on average is paid about $100,000 more than a physician in B.C.," said Steve Buick of the Ministry of Health in a written statement to CTV News Edmonton.

"Nothing in our proposals should stop physicians from providing high-quality primary care; we’re only aiming to reduce the excess amounts we pay for it."

Buick said they’re bargaining with the AMA, and they’re still working through specific issues like the "time modifier."