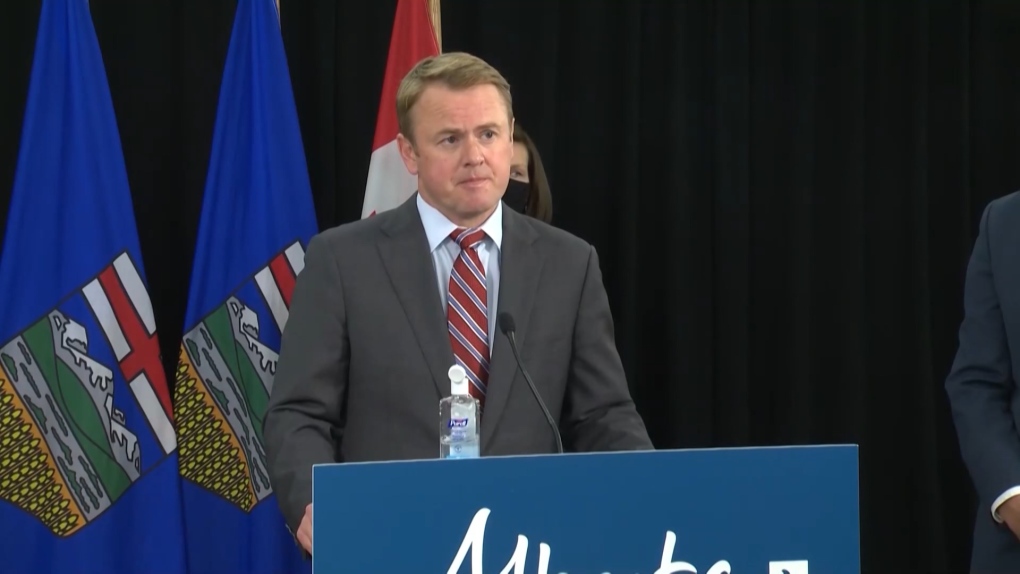 Tyler Shandro says it's important to put in health restrictions as needed to curb the spread of the novel coronavirus, but travel within Canada remains important.

“We know that there is travel that needs to be made through provinces,” Shandro said Wednesday.

“We're not looking at advocating for any changes to interprovincial travel at this time.”

Alberta is one of four Canadian provinces, including British Columbia, Ontario and Quebec, to report cases of new virus variants, which spread faster than the original strain and could rapidly overwhelm hospitals.

Shandro noted that Alberta made changes earlier this week to its international border testing pilot programs at the Calgary International Airport and the United States land border crossing at Coutts.

International passengers returning to Alberta via the airport or at the border crossing will have to remain in isolation between their first and second COVID-19 tests.

Until recently, they could go about their business after receiving a negative test result and before getting a second test six or seven days later.

Travellers will now have to self-isolate for a full two weeks if either test is positive.

Starting Friday, Manitoba is expanding its restrictions to require all domestic travellers - even Manitobans heading home - to self-isolate for 14 days after entering the province.

Since last June, only travellers arriving in Manitoba from areas east of Terrace Bay in northern Ontario had been subject to the requirement.

Manitoba Premier Brian Pallister said the move was made out of an abundance of caution, in part to combat the new variants.

The premiers for Ontario and Quebec have suggested new measures could be implemented swiftly to include mandatory quarantine for returning travellers and flight bans from countries where new variants of the virus are circulating.

Alberta has reported 20 cases of the United Kingdom variant and five from South Africa. One of the U.K. cases could not be linked to travel, prompting concern it could enter the broader community.

Dr. Deena Hinshaw, chief medical officer of health, said Wednesday officials have yet to pin down the origin of that one case but “very limited household spread” resulted from it.

Hinshaw added: “There's no indication at this point in time that there has been further onward spread.”

“We have a very limited window of opportunity to prevent these highly infectious new variants from spreading in Alberta,” said Notley. “Half-measures are not enough. The government must act quickly and decisively.”

New COVID-19 cases in Alberta have been falling to as low as one-quarter of what they were late last year, when daily numbers, at times more than 1,800, swamped hospital wards and forced cancellation of non-urgent surgeries.

Hinshaw announced 459 new cases Wednesday, with 604 people in hospital, 110 of them in intensive care.

The province has brought in a range of measures, including a sharp reduction in the number of customers in stores at any one-time and the closure of all amusement and entertainment venues such as casinos and movie theatres.

About 101,000 Albertans have been vaccinated, and 11,000 of them have received a required second dose.

This report by The Canadian Press was first published Jan. 27, 2021.