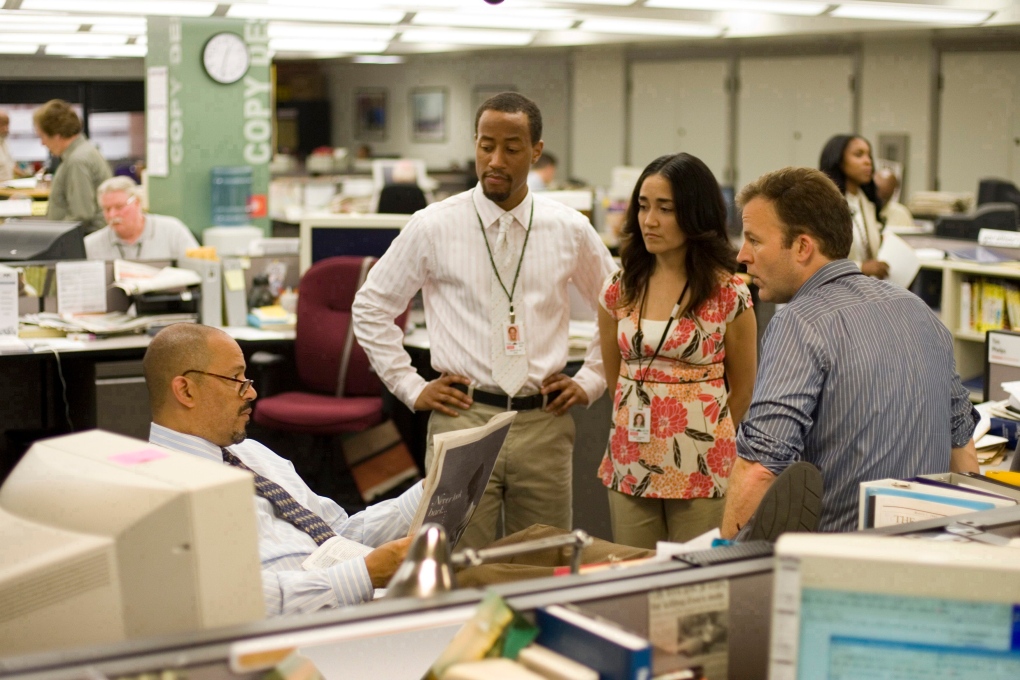 Clark Johnson, Brandon Young, Michelle Paress, and Tom McCarthy in a scene from the final season of 'The Wire.' (Paul Schiraldi / HBO)

EDMONTON -- With so many great shows available on so many different platforms, picking the next great TV show to binge-watch can be a seriously daunting task.

Even more daunting are those series’that had multiple seasons. It’s one thing to binge a seven or eight episode limited series like Tiger King or McMillions. But with a multi-season show, you could be looking at 40, 60, even 100+ hours of viewing.

During ‘regular’ times, it’s almost impossible for most of us to find the time to take a deep dive into a multi-season show, but…we’ve all got the time now, don’t we? Here are a few classic shows that are richly rewarding, and well worth the time commitment.

All of your “cool” friends have been talking about this show for years, but you’ve never quite found the time to tackle it. David Simon, who wrote all 122 episodes of Homicide: Life on the Street, and would go on to create shows like Treme, The Deuce, and The Plot Against America, created this wonder of a show.

Despite never getting close to the viewership of other prestige HBO dramas of its era, it was nonetheless such a massive critical darling that HBO somehow, miraculously gave it a five-season run; each season seen through the “eyes” of a different segment of the Baltimore drug scene.

From the brilliant cast to the masterful writing, The Wire reinvented the television crime drama. If you have never seen this series, drop everything else you’re doing, and move this to the top of your list. It really IS as good as you’ve heard it is. Crave.

Besides this awful pandemic that has basically shut most of the planet down, there IS another huge news story in 2020: the upcoming U.S. Presidential election. And considering just how much infighting, backstabbing, and double-crossing we’re already seeing on a daily basis, there has never been a better time to revisit the most gleefully profane and scathingly funny show ever made.

Created by Armando Iannucci (who also created the fantastic British political satire, The Thick Of It), Veep is gaspingly funny, and absolutely relentless in its disdain for Washington corruption.

Julia Louis-Dreyfus, already comedy royalty due to her role on Seinfeld, was a six-time Emmy Winner for her vicious portrayal of Vice President Selina Meyer, and she was oh-so-ably supported by an impeccable cast, including the great Tony Hale, Anna Chlumsky, Reid Scott, Timothy Simons, and Matt Walsh. Crave.

Initially dismissed by many as Breaking Bad-light, this Jason Bateman and Laura Linney-led crime thriller has more than come into its own, with the latest season standing out as its strongest yet.

As money launderer Marty Byrde, Bateman is as solid as ever, using his everyman persona to great effect, but it’s Laura Linney who has the juiciest role of her career here, as Marty’s (initially) mortified wife who becomes slowly more entrenched in his world of crime and high-stakes danger.

Filled with gut-wrenching tension and pitch-black humour, this show is as highly addictive as anything else on the air right now, and the incomparable Julia Garner deservedly won an Emmy for her take-no-prisoners performance as Ruth Langmore. Netflix.

Breaking Bad is in my Top 5 shows of all time. So while I was cautiously optimistic when they announced that Saul Goodman was getting his own prequel spinoff series, nothing could have prepared me for what an incredibly rich and satisfying experience this show has turned out to be.

Despite all odds, it has managed to equal Breaking Bad in sheer quality, sending us down a path that we know is going to end up in the Breaking Bad universe, while forging an identity all its own.

While Saul was a fun sidebar character in Breaking Bad, Bob Odenkirk has given Jimmy/Saul far more layers in this series than we could have ever imagined. And of course, the magnificent Jonathan Banks, so memorable on Breaking Bad, is also a huge part of this prequel.

But it’s Rhea Seehorn, as idealistic attorney Kim Wexler, who is the heart and soul of this show, a truly complex and fascinating character, through whose eyes we also see Jimmy, and want so badly for him to make the right choice for once. Do yourself a favour, and once you’re done with this, go over to Breaking Bad, and binge on the whole enchilada. You’ll be glad you did.

The late, great Garry Shandling’s groundbreaking and influential single-camera ‘mockumentary’ series basically created an entire new genre of programming. It’s hard to imagine a world where The Office, Curb Your Enthusiasm, The Comeback, or countless other shows would even exist, were it not for this brilliant behind the scenes look at a (fake) late night talk show.

As “Larry Sanders," Shandling gives us a warts-and-all look at the real people behind the smiling TV personalities, and while Larry is all smiles and laughter on his nightly talk show, he’s a neurotic, high-maintenance, insecure narcissist when the cameras are off.

Jeffrey Tambor is gloriously desperate as his attention-seeking sidekick, Hank Kingsley, and Rip Torn is a force of nature as Larry’s Producer, Arthur. Dozens of celebrities played themselves throughout the series’ six seasons, often taking the opportunity to viciously poke fun at their own personas. If you’ve never experienced the brilliance of this show, now’s your chance! Crave.

Steve Carrell & Co. did the near-impossible, as they transplanted an incredibly well-regarded British show to America, and against all odds, crafted as show that became just as – if not more –beloved than the original. Netflix.

What started as a star vehicle for SNL alum Andy Samberg turned into a breakout hit for its mostly unknown supporting cast. Plus, it showed the world that Terry Crews and Andre Braugher could be hilarious! Who knew? Netflix.

After a terribly disappointing, six-episode first season, NBC somehow had enough faith in this show to renew it for a second season, and thank God they did, because after a summer spent retooling, rewriting, and expanding upon its universe of characters, Parks came back not only stronger than ever, but quickly emerged as one of the funniest shows to ever hit the airwaves. Amazon Prime.

It never should have worked, spinning off a supporting character from one of the most popular sitcoms of all time (Cheers). And we’re not even talking Carla or Norm here, we’re talking…Dr. Frasier Crane? But like the show from which it spawned, the creators of Frasier knew to surround him with a brilliant supporting cast. The result was a fast-paced, sophisticated farce that provided some of the biggest laughs of the 90s. Crave.