Organizers said there were over 60 pavilions representing about 84 cultures from around the world.

“We opened at 12-noon and before we opened there was like 10,000 thousand people here,” Jack Little, the executive director of the Heritage Festival Association told CTV News.

“If we have three days of sunshine, as it looks like we might have, we fully expect to smash every record,” he smiled.

Food, cultural performances, crafts, artwork and clothing have all been put on display, including a new addition this year – the Columbia pavilion.

Also new this year the festival features a digital experience with an iPhone and Android app to help people navigate their way around the park.

The app, designed by XEA Services Corp., provides an interactive map of the pavilions and amenities as well as menus for foodies.

“There are 400 opportunities to eat something different,” he added.

“I think it is a great way to interact and a beautiful way to see other cultures,” Columbia pavillion co-organizer Daiane Moy Sanchez said.

Although admission is free festival organizers encourage food bank donations and have been hoping to garner over 50,000 kilograms in donations for the charity this year.

Unused food tickets can also be donated – the Edmonton Heritage Festival Association will reimburse the charity for all tickets turned in. 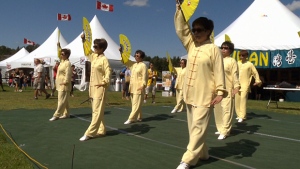