Homeowners in downtown Edmonton who called police after a man broke into their basement aren’t happy about the state their backyard was left in.

In the early morning hours of Nov. 26, Candas Jane Dorsey heard thumping from her basement before the house alarm went off.

“(Timothy) came down… went around and had a look through the kitchen window downstairs and saw someone… rummaging around and he turned and he pointed his arm towards Timothy with something black in his hand,” said Candas Dorsey.

They called 911 and said the intruder might have a gun. Police arrived within four or five minutes, according to Dorsey.

“Their response to the implied threat was really great, they were making some announcements, they were waiting a long time for him to come out. He didn’t. They set a flashbang off in the house but he still didn’t come out,” said Dorsey.

A police spokesperson told CTV News tactical members reported that they could not safely approach the doors to the basement due to the firearm threat.

'THAT CAN'T BE GOOD'

Around 9:30 a.m., Dorsey estimates, the intruder came outside. Police searched the basement, which Dorsey said the intruder had made a mess of, but didn’t find a gun.

“I come over to talk to the (police) after everything is cleared… and I notice there’s a big vehicle in the backyard… and I’m thinking that can’t be good,” said Dorsey.

Dorsey said officers told her the armoured vehicle would actually need to be towed out as it had broken down.

According to police, a transmission line on the ARV1 armoured vehicle was ruptured but could not provide a timeline on how long the vehicle would take to be repaired.

After the vehicle was removed, Dorsey said she realized police had taken down part of her fence, along with several trees and bushes to get the vehicle into the backyard. 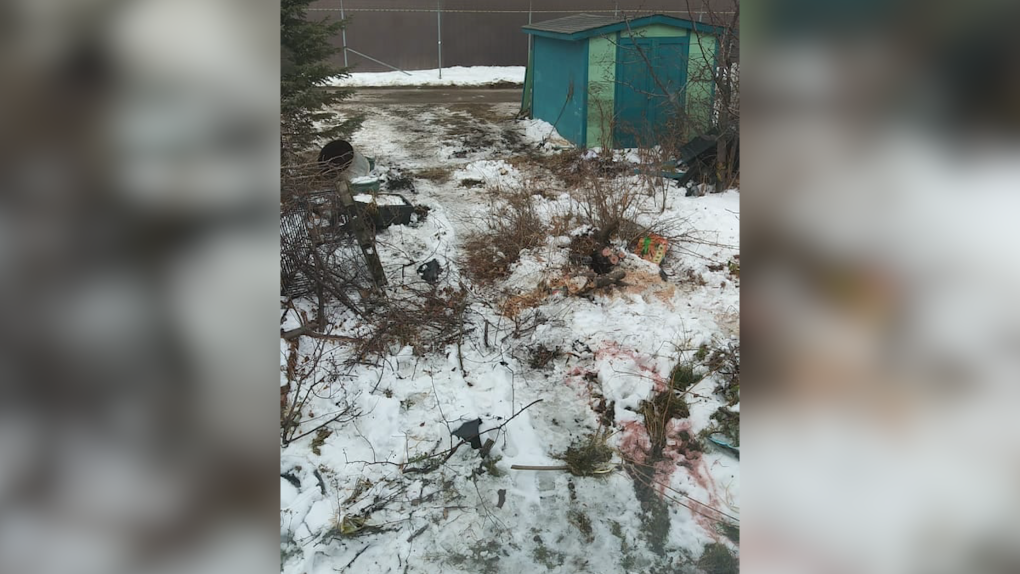 “It’s taken years to build this up… it’s really a loss,” said Dorsey.

She is also concerned about the lack of a fence as they won’t be getting a new one until spring.

“When the police respond to an incident like this, the primary concern is public safety, so they’re going to isolate that house, ensure there’s no one in it but the bad guy or bad guys and try to negotiate a departure from that house,” said Chris Lewis, CTVs public safety analyst.

“They have to do that as safely as possible and sometimes when they do that, they actually do damage, they smash a door or, in this case, they take down a fence to try and get some element of cover in there for their eventual arrest teams.

“You want to maximize officer safety and so if using that (armoured vehicle) was the right decision, and that’s their call, then how do we question that.”

Dorsey has begun a claims process with the city for the money it will take to repair the damage done to her property.

According to Lewis, there also needs to be better communication with people about why police decide to make these types of decisions and that there should be reassurances sooner about compensation.

“I realize some of these processes take time and lawyers get involved, but pay these people and let’s move forward and then debrief the heck out of this to decide, ‘Did we do this properly from a tactical perspective, did we use the right resources, did we take the fence down properly,’ and make changes in the future,” added Lewis.

EPS tells CTV News damage consisted of two broken windows, a section of fence removed, and a tree was broken.

North Korea on Monday fired at least one suspected ballistic missile into the sea in its fourth weapons launch this month, officials in South Korea and Japan said, as it continues to demonstrate its military might amid pandemic border closures and paused diplomacy with the United States.

Neighbours use kayaks to rescue driver after car crashes through ice in Manotick, Ont.

Ottawa paramedics say the driver declined treatment after being rescued from the Rideau River after a car crashed through the ice.