How do you tell a 36-year story in five minutes? You can't. But I tried.

It all came as a bit of a shock.

We were told there would be an announcement on Aug. 27 at 10 a.m. in the atrium (the central part of the building at CTV News Edmonton). Many of us whispered amongst ourselves about what it could be. Ratings update? Layoffs? Big new hire?

When I arrived at work that morning, I’d noticed Daryl sitting in his desk wearing a full suit (shirt, tie, everything), as if he was about to go on-air. It struck me as a bit odd. As we filed into the atrium, I recall seeing Daryl pacing a little bit off to the side, in the part of the room where we usually watch these types of announcements from.

Again, I thought nothing of it.

Little did I know Daryl was about to step to the microphone at the front and announce his impending departure. When he did, you could actually feel a sadness in the room: a collective realization that CTV News Edmonton—which has undergone so many changes in recent months—was truly at the end of an era. Daryl said it was a little earlier than he envisioned, but that he was good with it. He remarked the hardest part was leaving the team. It was the first (and only) time I’ve ever seen Daryl let his emotions get the best of him.

Our managing editor, Rob McAnally, called me into his office to inform me that I’d been tapped to do the "send-off" piece for Daryl’s final day on Friday, Sept. 13. I was delighted to be asked. But as I walked away, I felt the (self-imposed) pressure of the task at hand. How do you summarize the 36-year career of a local broadcast legend in a few minutes? How could I do him justice? There was one person I knew could ask for advice.

The sit down with Daryl was pretty informal. I knew he did not want to make a big deal of anything regarding his departure. He actually remarked that he didn’t want his final newscast to make a big deal about him leaving because, after all, it’s still a newscast.

But I needed some information. While I was completely aware of how long he’s been here and some of the big stories he covered, I didn’t know a few things: exactly where and when he began his career (NAIT and CKSA Radio & TV in Lloydminster). Who he co-anchored with over the years (from Daphne Kuehn, Leslie Miller and Shawna Randolph through the 90s, to Carrie Doll until 2014, and since then, Erin Isfeld). And what his personal highlights are.

Nowadays, all of the stories and newscasts we do are stored on massive servers and accessible via computer. But most everything done prior to 2013 is archived on DVDs and (gasp!) beta or three-quarter-inch tapes. Daryl was able to provide me with tapes from his early beginnings as a broadcaster, which are just pure gold.

I scrubbed through dozens and decades of old newscasts, stories, and even blooper reels. One thing you don’t really get to see in the piece I assembled is the full reports Daryl did over the years. There’s one story where Daryl and two other local journalists drive an obstacle course set up by the Edmonton Police Service in a parking lot. They then get drunk (literally served shots by officers) and drive the same obstacle course to demonstrate the effects of alcohol while behind the wheel. The results are predictable, but the story is memorable. The best one is the time Daryl tried out as an offensive lineman for the Edmonton Eskimos in the early 90s. He takes on all-star defensive lineman Mike Walker (“I hope he knows what he’s getting into,” Walker says with a laugh) in a practice drill. The results are once again predictable, as you can see above.

In watching everything back, it struck me: Daryl was always good. It’s no wonder he was made the 6 o’clock anchor so quickly after arriving at CFRN. And he just got better with time and experience.

And as a reporter, it was always comforting to know Daryl was steering the ship, especially in times of breaking news. He just takes the show and runs with it.

The other takeaway for me in watching all the newscasts and outtakes and banter is that he’s practically the same guy now as he was then. He’s always been Daryl. I heard this more than a few times in conducting the interviews for the piece: "With Daryl, what you see is what you get."

Things are going to be weird without Daryl after this week. But I think my colleague and Daryl’s co-anchor, Erin Isfeld, said it best: "What we do now without him will always have a tiny piece of him as part of how we cover things."

I think she’s bang on. When news breaks, when we’re doing continuing coverage, or just facing daily decisions, I think we will sometimes stop and ask ourselves: What would Daryl do?

I know that’s what I did when approaching this send off for Daryl. I asked him: “Daryl, what would such a piece look like?” He gave me some advice, and off I went.

I hope you enjoy the story. I hope Daryl enjoys it.

And I hope it does his legendary career justice.

Watch Dan's piece on CTV News at Six on Sept. 13 and on CTVNewsEdmonton.ca shortly after.

Story created alongside editing extraordinaire Colin Schmidt, who has been here since 1987 and who did a fabulous job in a short amount of time, and Art Director Joel Higham, whose talents turned a creative vision into a true story introduction. 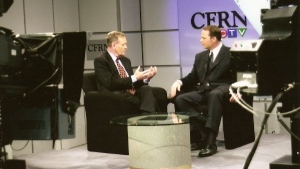 A look back at the career of Daryl McIntyre

IN PICTURES Take a look back at the legendary career of veteran broadcaster Daryl McIntyre, who will anchor the CTV Edmonton desk for the final time Friday night.