How many Alberta landmarks can you spot in 'The Last of Us' trailer?

How many Alberta landmarks can you spot in 'The Last of Us' trailer? 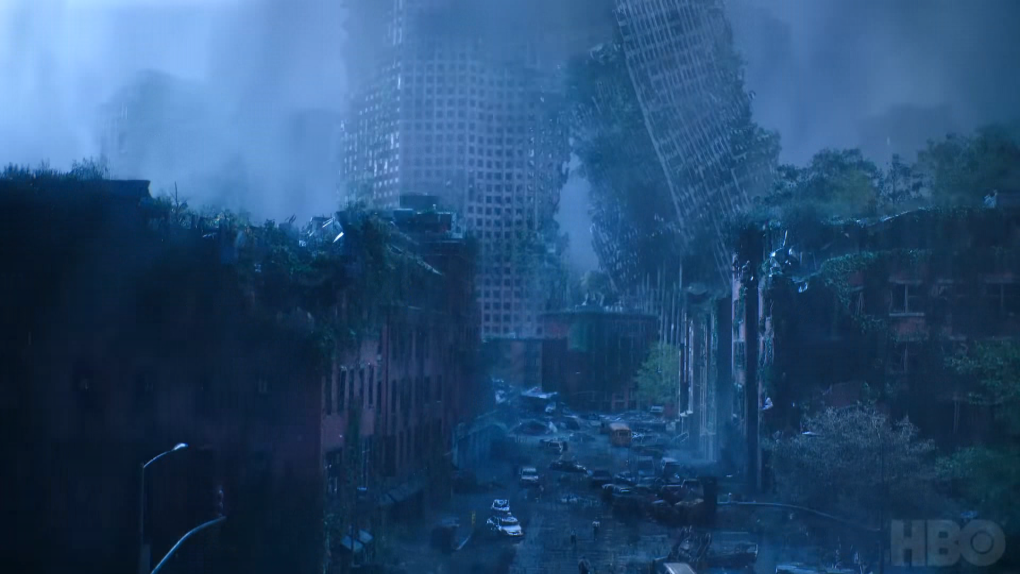 The first full-length trailer of The Last of Us has revealed the first glimpses of Alberta-shot scenes in HBO's adaptation of the apocalyptic video game.

After watching film crews take over parts of their communities in 2021, Albertans saw on Monday for the first time how their backyards may appear on the TV screen.

The one-minute-38-second long trailer, which had been viewed 15 millions times on Twitter by the next day, teases the story of a smuggler tasked with escorting a teenage girl across the United States after it was ravaged by an outbreak.

Here are some frames that appear to have been shot in Alberta: 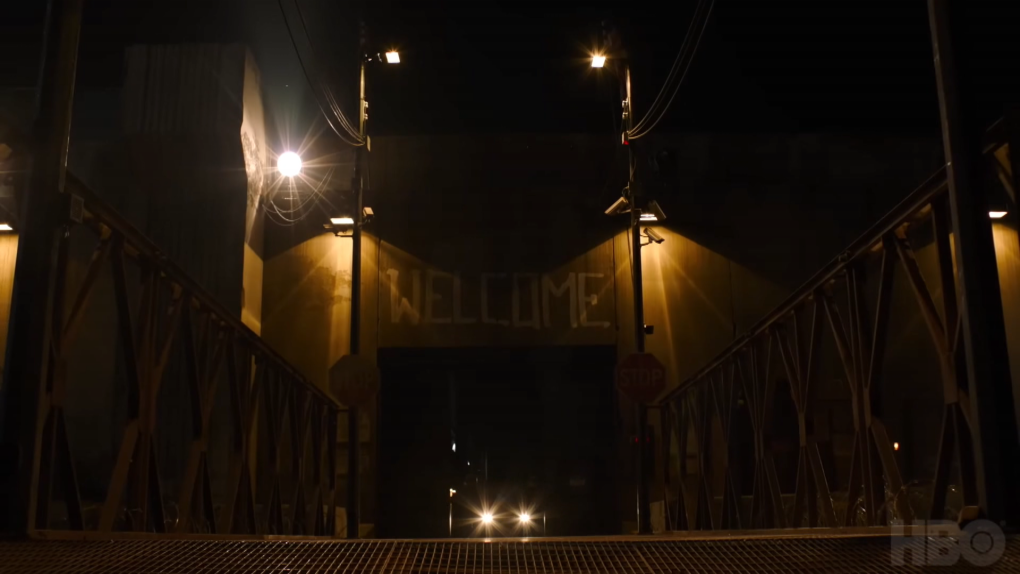 Nineteen seconds into the trailer, a vehicle leaves what may turn out to be one of the post-apocalyptic world's quarantine zones.

The site's gate boasts a giant painted "Welcome" sign above its entrance – exactly like a set built in Calgary's Ramsay community earlier this year. 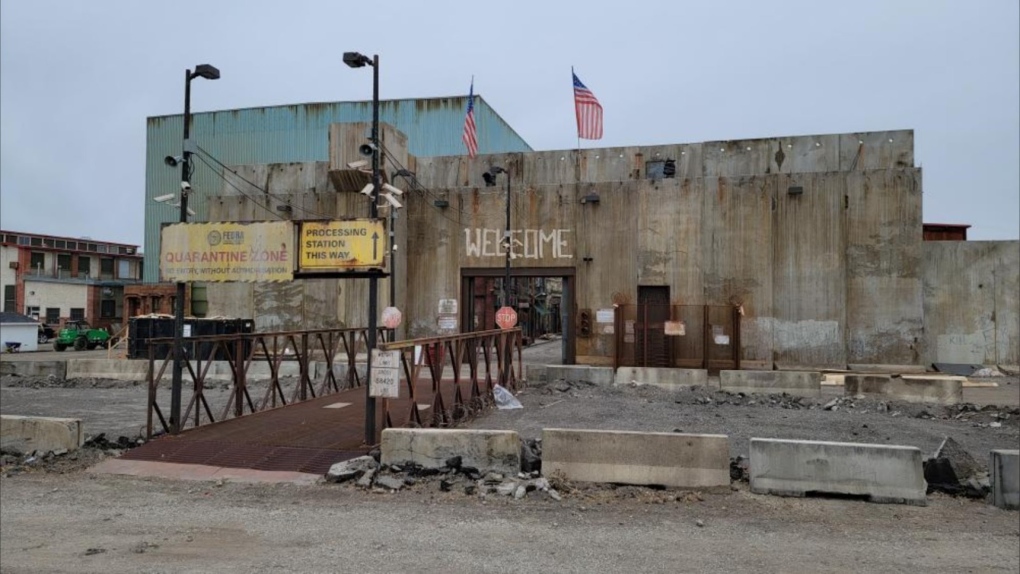 The set remained up for weeks, until right before the city's world-famous Stampede returned this summer. 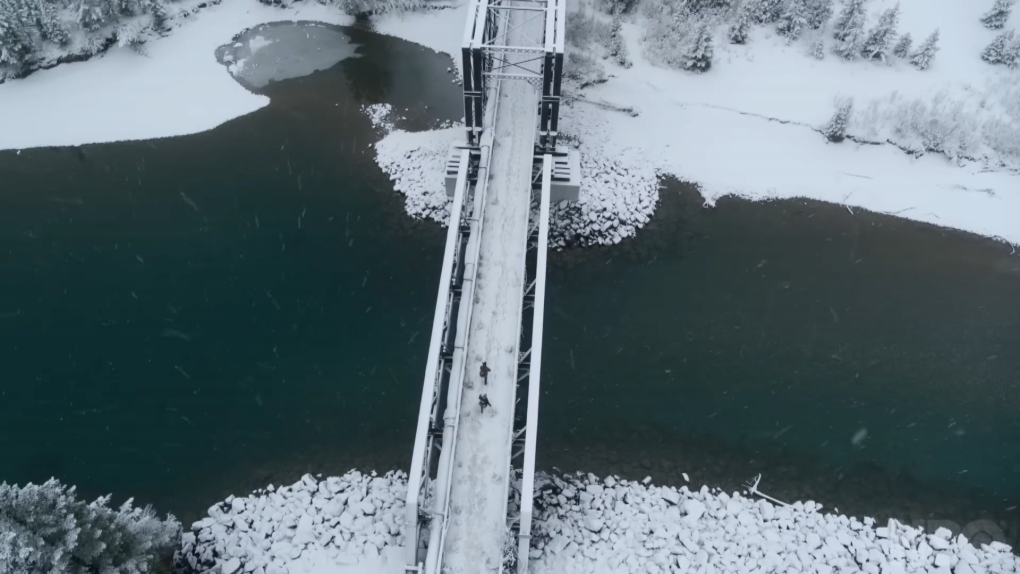 This shot of characters Joel and Ellie crossing what is believed to be the Canmore Engine Bridge has been used in promotional material by HBO before.

According to HistoricBridges.org, the double-trussed bridge was built in 1891 by the Canadian Pacific Railway to serve a coal mine and is characterized by the vertical end posts.

The bridge and its Rocky Mountain backdrop are well photographed.

In October 2021, The Last of Us production took over 104 Street in downtown Edmonton. Vehicles appeared haphazardly abandoned down the lane, and buildings taken over by vines.

Could the street have been turned into downtown Boston, where part of The Last of Us is set?

Edmonton's 104 Street features a number of brick buildings, as the disaster scene in the trailer does. 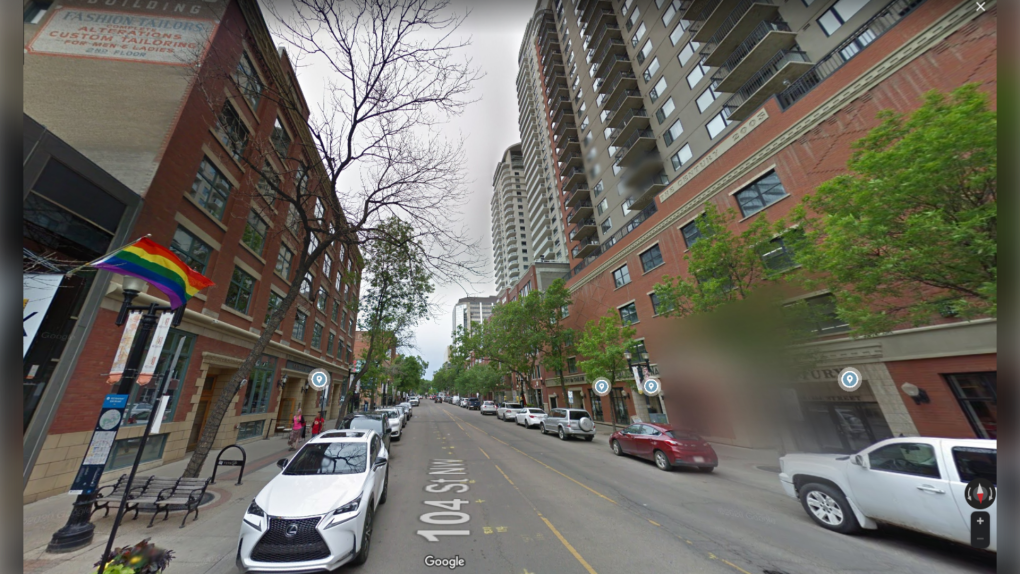 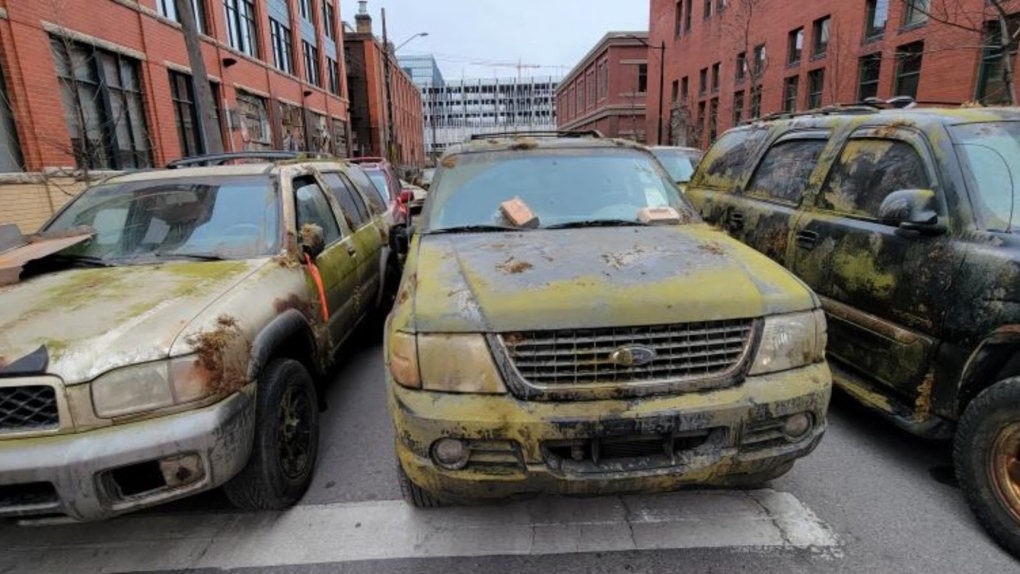 Either way, fans believe the crumbling skyscraper in the trailer is meant to be the video game's Goldstone Building. 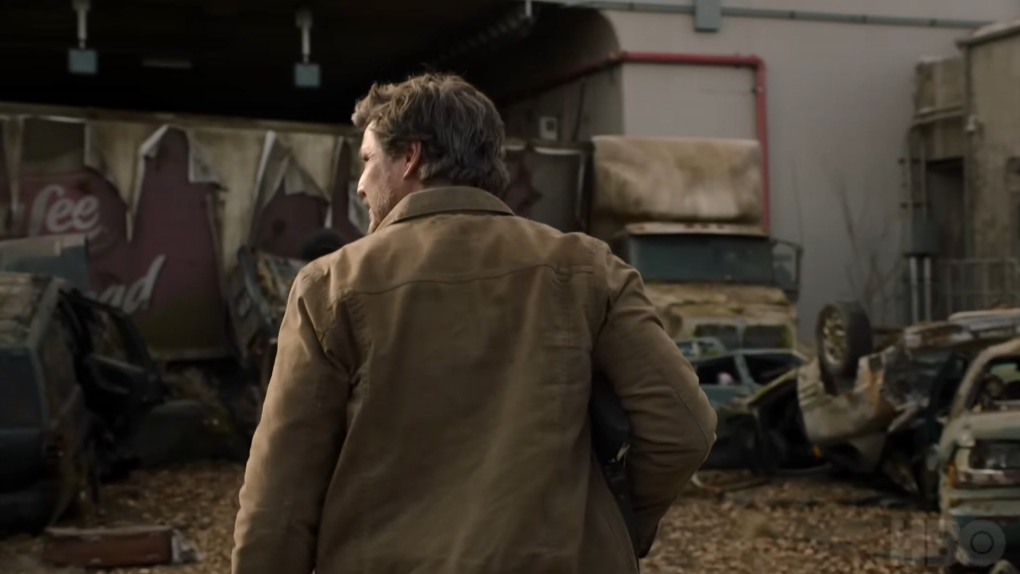 While officials never said which production closed Calgary's Airport Tunnel in March, a shot from The Last of Us trailer suggests it could have been HBO.

Behind Pedro Pascal's character lies the expected rubble and debris of an apocalypse. And behind that is a piece of infrastructure that looks similar to the eastbound entrance of Airport Tunnel, west of 36 Street NE.

WHAT OTHER LOCATIONS WILL BE FEATURED IN THE SHOW?

As the series premieres in 2023, more Alberta-shot scenes are due to be revealed. According to the Internet Movie Database, The Last of Us filmed in 13 locations across the province.

In October 2021, production crews transformed the Alberta Legislature to fit the TV show's post-apocalyptic setting. Pascal was spotted by downtown onlookers on the set.

By the looks of this teaser, filming also took place at the Southern Alberta Institute of Technology in Calgary.

Frid took these pictures of sets on the 4th Avenue flyover and Memorial Drive in Calgary and Canmore. 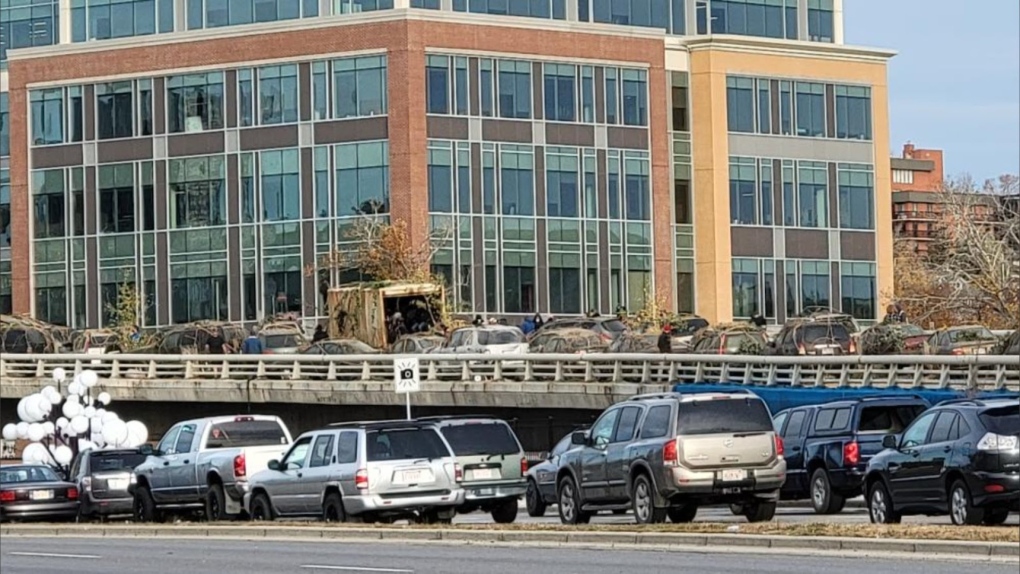 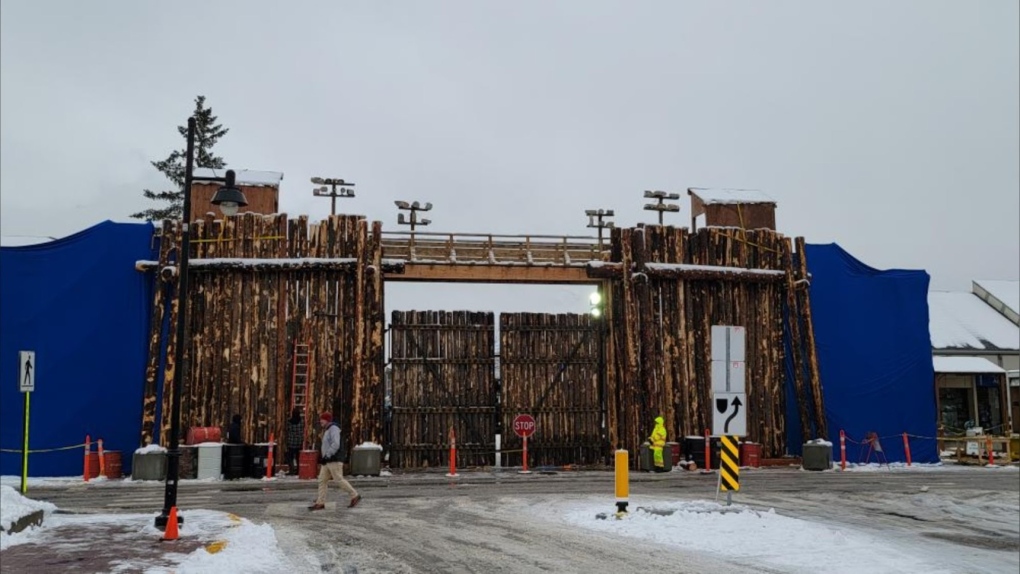 And viewers should expect scenes shot at Kananaskis' Wedge pond:

They used a dodge durango to film the driving scene. pic.twitter.com/o2VhIQZ73l

As well, the High River community Beachwood community – which was abandoned in real life after a flood in 2013 – is expected to appear.

Here are more scenes from the trailer. Did you see Alberta shots that we missed? Let us know on Facebook or Twitter.

New research has found that climate change could cause more than 100,000 tonnes of micro-organisms to be released into natural ecosystems every year, a result of melting glaciers in the Northern Hemisphere. The ramifications of this, however, remain unknown.