'I had a laugh about it': Oilers' Jay Woodcroft named most handsome NHL coach

'I had a laugh about it': Oilers' Jay Woodcroft named most handsome NHL coach

The Oilers bench boss was forced to talk about his looks and his little-known child acting career on Wednesday after a website named him the best looking coach in the league.

"I had some former players that I had coached and some buddies reach out and rip on me a little bit. I think that's healthy when your buddies keep you in check, so I had a laugh about it," Woodcroft told reporters before changing the topic to hockey.

Woodcroft said people began contacting him about the list that ranked all 32 coaches, after it came out early Tuesday morning. Calgary Flames coach Darryl Sutter came in second and Derek Lalonde of the Detroit Red Wings was third.

Video then surfaced of Woodcroft's work as a child actor and extra on shows like The Littlest Hobo.

"I had a chuckle this morning, but that's about it," Woodcroft said of the reaction.

"When I was a really young kid that was part of my life. I think when I was in the Littlest Hobo I was under two years old. For me the one side benefit to that as a little kid was I felt comfortable going into any type of room and I think that still helps me in my position now."

Woodcroft said he has shown players some of his acting videos before in acts of levity, but said he and his team focused on Wednesday's preseason game against Calgary.

Golden Ratio Face is a popular app that is said to use facial symmetry, facial structure and a "golden ratio" to measure physical perfection according to ancient greeks. 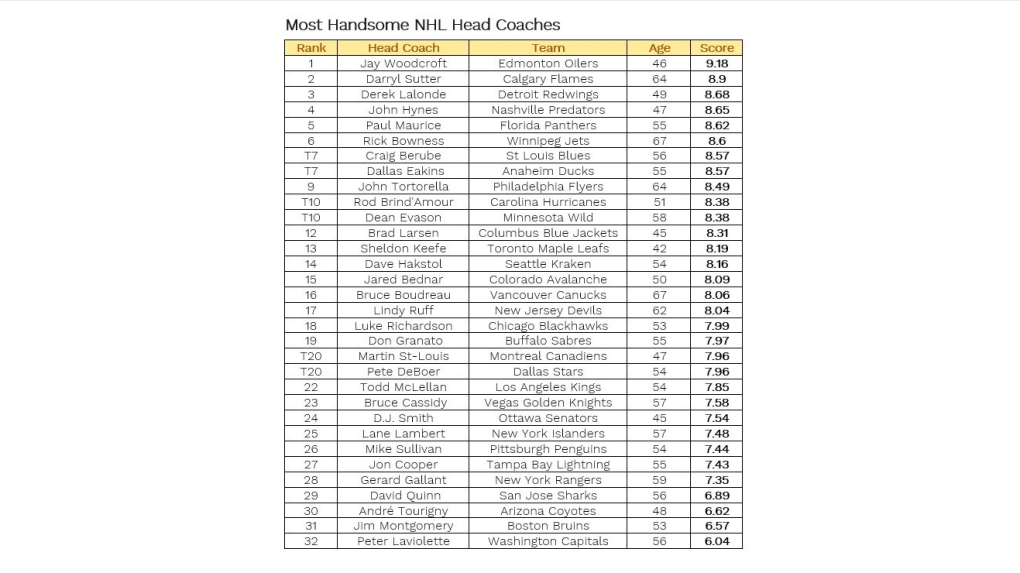