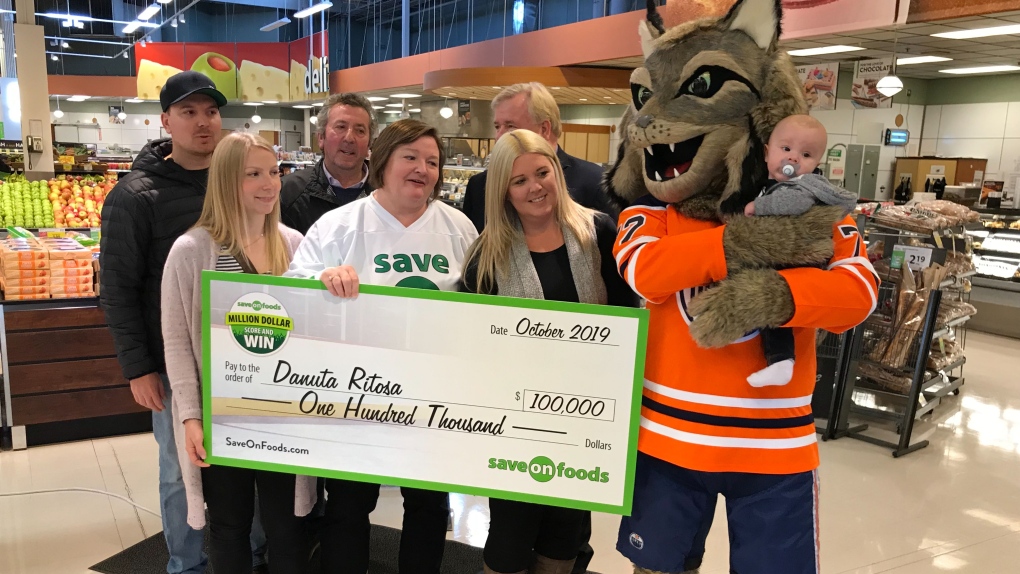 Danuta Ritosa beamed as she accepted a giant $100,000 cheque on Wednesday.

The Edmonton woman is the lucky winner of Save-On-Food's Million Dollar Score and Win contest. She won after Edmonton Oilers forward James Neal pocketed four goals in an Oct. 8 game against the New York Islanders.

"I started watching the game halfway because my family has called me and texted me that my name showed up while the game was going on," Ritosa said.

She said she was literally sitting on the edge of her seat when Neal scored his fourth goal, which meant Ritosa automatically won the rare $100,000 prize.

"All of a sudden I just jumped up with my hands up in the air," she said.

Save-On-Foods customers are automatically entered into the Score and Win contest every time they use More Rewards loyalty cards. Had Neal scored a fifth goal, Ritosa would have won the ultimate prize of $1 million, but she says she's happy with what she got.

Ritosa said she even got to meet Neal Wednesday morning, but didn't chastise him for not getting that fifth goal.

"He was very nice. We had a nice conversation, we had pictures taken. I thanked him for having a great start of the season," she said.

As for the money she did win, Ritosa plans on sharing it with her family, paying off bills and taking a long-awaited family trip, possibly to Hawaii.

"Hopefully, that will happen. I mean, why not?"