A woman rescued from the second storey of a burning townhouse in north Edmonton Wednesday said she was thinking the worst until firefighters pulled her from the building.

Fire broke out at the townhouse complex at 82 Street and Schonsee Way around 9:30 a.m.

Sydney Werkman said she thought an adjacent complex was on fire when she heard sirens, but opened her bedroom door to find flames creeping up her back window into the upper level of her home.

She said she felt panic and uncertainty until firefighters raised a ladder up to her window.

“It felt like forever, but I guess it was only about a minute,” she said. “I just don’t have words for it.”

Video captured of the rescue shows Werkman perched on a second-storey window ledge while thick smoke billows from the burning home.

Another firefighter is then seen rushing with a second ladder in an effort to help rescue her from the building. 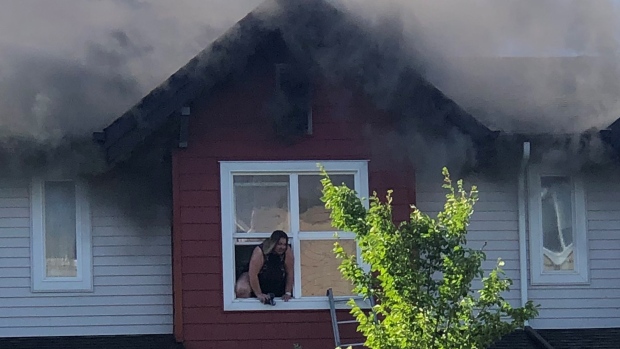 Sydney Werkman ran to her upper-level window when smoke started billowing into her Edmonton townhouse. Aug. 28, 2019.

Werkman said when she got down the ladder and looked back at the fiery blaze, she started to cry.

“I just couldn’t believe what was happening and how it had happened.”

Firefighters said they were on scene almost immediately after receiving the call.

"The crews did a really good job here, coming on scene really quick. They were here within two minutes and rescuing the woman who had to be removed right away," said District Chief Martin Prins. "That was their first priority and they good a job on that."

"That minute seems a lot longer than you think," said Gina Fernandes, who witnessed the fire. “How fast they worked is amazing."

Officials say everyone was evacuated from the townhouses safely and no serious injuries have been reported.

Werkman said while she’s devastated to have lost many of her possessions, she’s glad everyone made it out OK.

“Just thank you to the firefighters, just how quickly they responded and how calm they were and how caring and compassionate they were,” she said. “Not one didn’t smile or make sure I was OK.”

Four units were impacted by the blaze. A witness tells CTV News he heard a popping sound inside the house after the fire broke out.