The city has released a comic book inspired by the imaginations of Edmonton kids.

It’s called The Builders, and it was formed after collaborating with elementary students from across the city.

“This is an opportunity for us to engage and collaborate with Edmonton Public Schools and City Hall School and learn from our youth about how they see their city, how they want to engage with their city and how they see our future city.”

Through the process of compiling ideas and illustrations before making the final comic, Balone said they learned a lot about what was important to young people living in Edmonton.

“It was great to see their illustrations, their drawings and their words about how they see their superheroes engaging with their city.”

“I’m inspired by them,” said Mayor Amarjeet Sohi. “They’re so creative, they’re so innocent and they engage with you in a very authentic way.”

“Seeing kids in City Hall is phenomenal. This is the beautiful part of my job.” 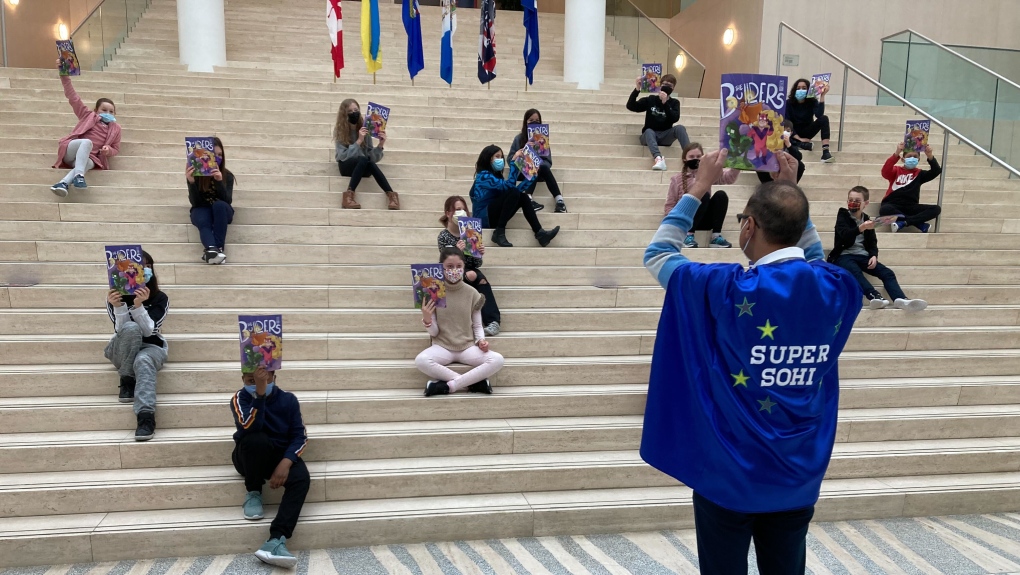 According to Balone, the current zoning bylaw doesn’t allow for a lot of mixed use in the city where you would see a combination of housing, commercial and industrial activities in one area. The goal moving forward is to change that.

“We’re very segregated in our uses in our city,” she said.

“You have residential, you have commercial strips and industrial so what we’re looking at doing with our new zoning bylaw is having some more mixed use opportunities especially our nodes and our corridors and our important places and spaces in our city.”

Balone said the new draft is currently underway and will be presented to a city council public hearing in late 2023.

In the meantime, podcasts and videos will be released to continue with community engagement.

Plus, Balone said they’re hoping to work with junior high and high school students next on possible housing design work and input.

For more information on The Builders and the Zoning Bylaw Renewal Initiative, click here.

“One of the strongest tools the city has is the zoning tool. It’s used to engage people to see what kind of city they would like to see,” Sohi ended.

Many Canadians remain unaware of the involvement of forced child labour in the products they buy, according to non-profit agency World Vision Canada.

Prime Minister Justin Trudeau headed to the G7 summit in Germany on Saturday without a consensus from the Commonwealth to condemn the Russian invasion of Ukraine, but with a chorus of countries calling for help to overcome the fallout of the war.

WHO panel: Monkeypox not a global emergency 'at this stage'

The World Health Organization said the escalating monkeypox outbreak in nearly 50 countries should be closely monitored but does not warrant being declared a global health emergency.

Ukraine's largest LGBTQ rights event, KyivPride, is going ahead on Saturday. But not on its native streets and not as a celebration.

Norway shaken by attack that kills 2 during Pride festival