EDMONTON -- The mother of an 18-month-old from Red Deer is thanking doctors at the Stollery Children’s Hospital for saving her daughter’s life.

Amélie Adolphe was rushed to the hospital in Edmonton a month ago after she keeled over and started bleeding. It turned out the toddler had swallowed a button battery. 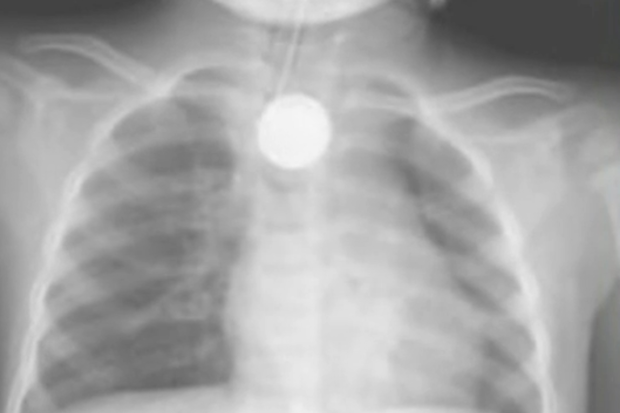 “The chances of her surviving were so grim because so much damage had been caused. It had ruptured her esophagus, trachea, aorta and carotid left artery, and then she flat lined twice,” said Leslie Bangamba, Amelie’s mother.

The batteries are often used to power watches, remotes or toys.

“The electrical current has gone out of that, is going continuously out of that battery and bores a hole into their esophagus and beyond,” said pediatrician Dr. Patrick Pierse.

That’s what happened to Amélie. The cardiac surgeon who helped save her says there was massive internal bleeding that can be fatal. It took a whole team to save her.

When the Chief of Congenital Cardiac Surgery, Dr. Mohammed Al Aklabi, was called to the hospital in the middle of the night, Amélie was already experiencing massive bleeding.

“Our colleagues from ENT and general surgery were trying to retrieve the button from the esophagus but because of the huge amount of blood, they couldn’t see it and the baby was unstable,” Al Aklabi said

Al Aklabi said he and the team rushed the toddler into the operating room and when the bleeding settled down momentarily, doctors opened her chest, put her on a machine and cooled her down.

“And by doing that we were able actually able to take her blood out, and then I was able to see the hole,” he said. But there were several holes. In addition to a hole in part of her aorta, there was a big hole in the esophagus and another hole in the back of the trachea.

“I was able to actually patch that aorta with her own tissue,” he said. “Also we fixed the trachea hole and with the help of our colleague from general surgery we actually fixed also the esophagus.”

“So I think we were happy we could help save this baby’s life with everyone’s help from all the team,” Al Aklabi said.

Bangamba says she knew batteries were dangerous, what she doesn’t know is how her daughter got her hands on one.

“We don’t know where or when she ingested this but it’s just seeing our daughter in ICU, almost losing her multiple times, I never would want this to happen to any other family, any other child.”

Amélie is still in hospital, but her health is improving, walking on a path her mom says could be a long road to recovery.

Friends of the family have organized a GoFundMe fundraiser on their behalf.