In the wake of new restrictions: Grieving parents forced to turn family away from 3-year-old son's funeral

EDMONTON -- A grieving couple who recently lost their three-year-old boy in a house fire west of Edmonton is questioning Alberta's new COVID-19 restrictions that restrict funerals to 10 people.

Shannon Dorward and Stuart Heatherington were cooking dinner at their Acheson, Alta., home the evening of Nov. 15 when their smoke alarm went off.

"I went to go down the hallway to wave off the fire alarm when I see out of my peripheral in the playroom that there were flames," Dorward told CTV News Edmonton.

The mother of three said she grabbed two of her boys and brought them out to their vehicle.

Three-year-old Ryley Heatherington was still inside the burning house. 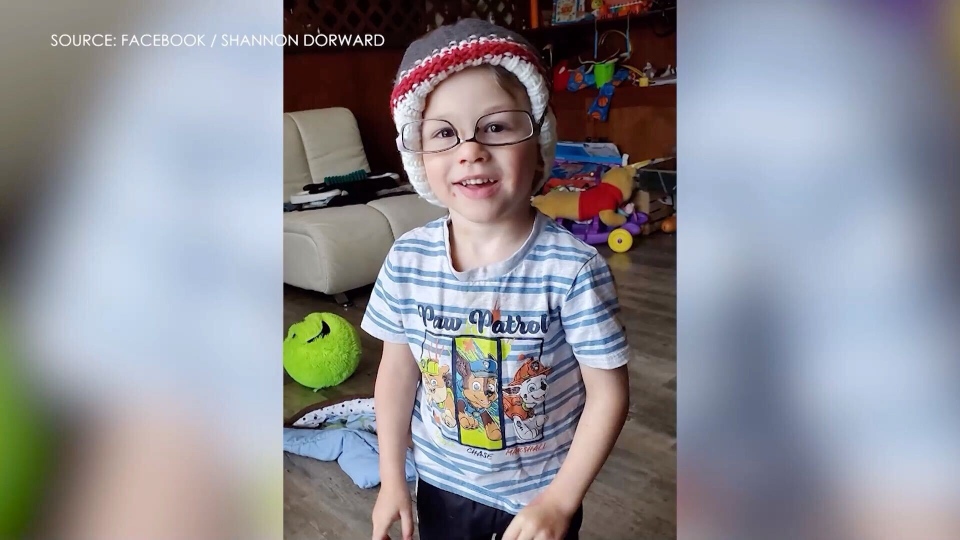 "I just searched every room and I couldn't find him," Ryley's father, Stuart Heatherington, said. "I inhaled so much smoke that it took me down to the ground."

Ryley lost his life that night and the young couple lost their son.

Now, one day after Alberta Premier Jason Kenney announced a new limit for funeral service attendees, the couple is left wondering why they're forced to choose which family members can and can't say goodbye.

"Funerals are down to 10 people but we could all take a break to go to the bar, go to the casino? Non-essential services, but something essential like a funeral?" said Heatherington. "I can understand weddings being pushed over. You can change dates deposits being lost – but we’re not going to wait until next year."

"We shortened it down to at least 20 people and that’s just family – uncles, aunts, grandparents," said Dorward.

Ryley's funeral is supposed to take place on Nov. 30, an event the two mourning parents see as essential for the entire family.

"Church is still at one third capacity and we’ve talked to the churches, but we can’t have it there because it’s only for service. But it’s like, 'Well this is a service too.'"

"These measures are tough, but they are necessary," Kenney said during Tuesday's announcement.

THE LATEST CHALLENGE FOR FUNERAL HOMES

Cameron Connelly, vice-president of Connelly-McKinley Funeral Homes, told CTV News Edmonton that the new restrictions are just the latest in a string of challenges.

"The reality of it is there's a lot that's in flux," said Connelly. "When you are planning a service and you're in that moment, you're dealing with the restrictions that are already in place."

Staff at the funeral home spent much of Wednesday calling clients to let them know their arrangements would need to be altered.

"This isn't a pleasant thing to have to go through with a family," said Connelly. "To have all of these changes happening in a time when they're grieving."

Connelly-McKinley Funeral Homes has been offering free livestreams of its services for those unable to attend in-person.

"It isn't a substitute necessarily for the in-person, but it certainly mitigates some of those issues where you're able to at least say, ‘OK, there's a virtual experience to be had here that has meaning,'" said Connelly.

Meanwhile, as the Acheson couple seeks an exemption to allow more family to attend Ryley's funeral, their hope is that the province's law-makers have a change of heart.

"There’s enough spaces that are large enough that you can social distance and still honour those that have passed," Dorward said.