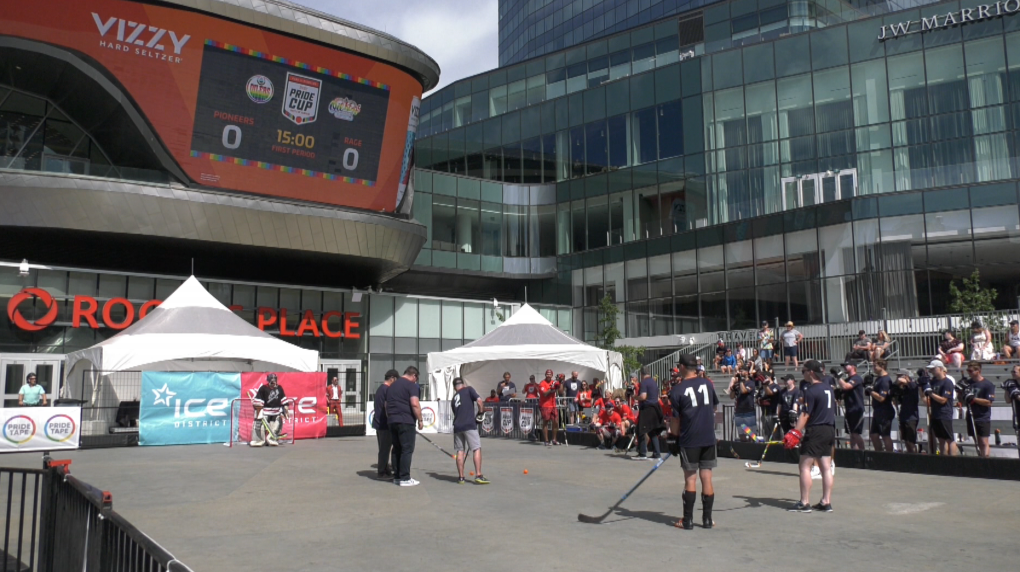 Pride Tape, an organization that aims to promote diversity and inclusion in sport so that one day there won't be a need for special tape highlighting equality, helped organize the event with the Oilers Entertainment Group.

Two inclusive hockey teams, the Calgary Pioneers and Edmonton Rage took on each other Saturday in the inaugural Pride Cup, a ball hockey tournament at the Ice District Plaza.

Jeff McLean, co-creator of Pride Tape, told CTV News Edmonton that the organization has partnered with the Oilers for the past six and a half years, with this new event being the latest collaboration.

"We are a made-in Edmonton initiative," McLean said. "It's so fitting (today) it's another Battle of Alberta."

The pair of teams have played friendly games at West Edmonton Mall in the past, but McLean says the ball hockey tournament will hopefully become an annual tradition.

"It's just the start," McLean added.

HUGE congratulations to the Edmonton Rage for winning the inaugural Pride Cup!! 🏳️‍🌈🏆️

Thanks to everyone who came down to #IceDistrict Plaza to support this incredible event!! The party continues here until 7PM! pic.twitter.com/mUUd6xHFI0

McLean hopes other NHL teams take notice and follow suit to help promote Pride and inclusion throughout the year.

"We always say, we just make the tape, you make it powerful," McLean said. "So it's really the people that put it on their sticks as a sign of support to the LGBTQ community. They deserve all the thanks."

Over 280,000 Maritimers still without power in Fiona's wake

Strong winds and heavy rainfall from Fiona have left over 280,000 Maritimers still without power, as of 11 p.m. local time Sunday.