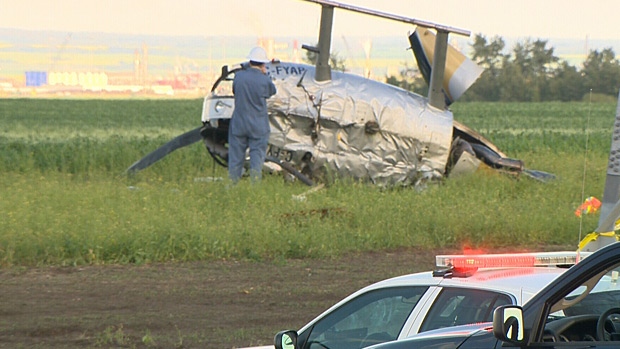 Two men were taken to hospital with serious injuries after a chopper crash Friday.

Police north of Edmonton were on the scene late Friday afternoon, after a helicopter crashed in a rural area, leaving two suffering from serious injuries.

Fort Saskatchewan RCMP said emergency crews and officers were called to the scene of the crash in the area of Township Road 544, west of Range Road 225 at about 4 p.m.

According to police, a helicopter had been working on installing power lines when it came into contact with a tower – and the pilot lost control of his craft.

The helicopter then crashed into a field.

RCMP said two men were on board at the time, and both were rushed to the University of Alberta Hospital – one was taken by ground ambulance, the other airlifted by STARS – both were in serious condition.

Police have not released the identities of the two men on board, along with the name of the helicopter company.

AltaLink issued a statement, saying the helicopter was working on the Heartland Transmission Line at the time of the crash.

“Our first concern is the health of the worker and the pilot injured in this incident,” Johanne Picard-Thompson, Senior VP of Projects for AltaLink said in a statement. “We will begin an investigation immediately to learn what may have caused the helicopter to fail.”

Transportation Safety investigators were on their way to the scene Friday evening, as were officials from Occupational Health and Safety.