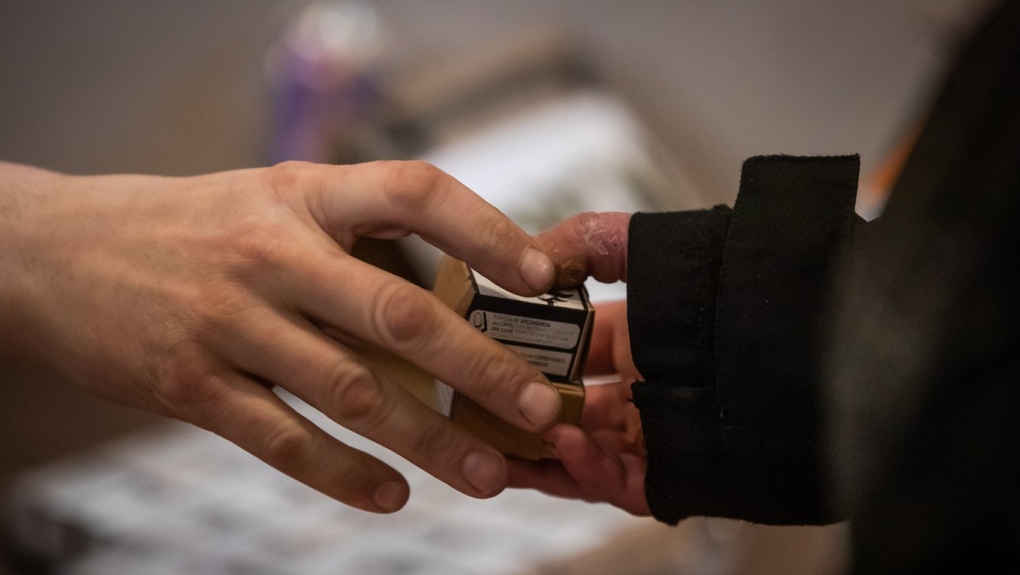 A person receives a tested supply of cocaine after gathering to remember those who died from a suspected illicit drug overdose, in Vancouver, on Wednesday, February 9, 2022. Advocates say while the early findings on safe supply programs are promising, those programs are still not meeting the needs of a large share of Canadians who are at risk of drug poisoning. THE CANADIAN PRESS/Darryl Dyck

“You know the result of that approach?” he questioned, “They have cut overdoses in half. They are saving lives, proving there is always hope.”

Poilievre echoed those sentiments in a recent five-minute video posted to social media titled “Everything feels broken,” where he also says drug addiction is the “result of a failed experiment” of regulated drug supply programs.

But we can fix it. pic.twitter.com/4WarLBsBUU

“This is a deliberate policy by woke Liberal and NDP governments to provide tax-funded drugs to flood our streets with easy access to these poisons,” Poilievre said in the video.

The alternative, he says, is Alberta’s successful recovery-oriented care model.

“In Alberta today, they’ve managed to cut overdose deaths by almost half by getting people into recovery.”

Caroyln Bennett, federal mental health and addictions minister, responded to Poilievre’s video on social media to refute his claims that “there is no safe supply of these drugs.”

“This is not true,” Bennett tweeted. “The evidence is clear on this. Safe supply saves lives. We cannot afford to return to damaging, unscientific ideology at the expense of people’s lives."

The evidence is clear on this. Safe supply saves lives. We cannot afford to return to damaging, unscientific ideology at the expense of people’s lives.

And, while addressing the Calgary Chamber of Commerce on Nov. 18, Alberta Premier Danielle Smith also used the statistic to assure the room of Calgarians that the UCP government's recovery-based care model was working.

“The approach we are taking has reduced opioid deaths 51 per cent year over year. We’ve reduced hospitalizations by 33 per cent. We have reduced the number of ambulance visits by 39 per cent and we’re going to continue doing it,” she said.

Opioid-related deaths in Alberta have been trending down throughout 2022. February had a high of 168 deaths, while March through May sat around 120 per month. June through August stayed below the 100-death mark.

But when comparing the highest number of opioid-related deaths in Alberta history last November (174) to the most recent month of data available from August of this year (94), there is a 46 per cent decrease – not 51 per cent as the UCP and Poilievre have advertised.

If factoring in all drug-related deaths – not just those involving opioids – there is a 47-per cent decrease.

When asked why the Alberta government most commonly uses November 2021 – the month with the highest number of deaths on record – as the benchmark, a spokesperson justified the comparison.

“Opioid-related deaths in August are down 46 per cent from their peak in November of 2021. August also marks the third month in a row opioid-related fatalities remain below 100 in the province, and these three months are the lowest on record since the start of the pandemic,” said Colin Aitchison, press secretary to the minister of mental health and addiction, in a statement.

“This is a significant decrease in opioid-related fatalities and we are cautiously optimistic that this trend will continue.”

DECREASE IN DEATHS COULD BE DUE TO SEVERAL FACTORS

The decline in overdose deaths in Calgary may have something to do with a lower level of drug toxicity, believes Euan Thomson, the executive director of EACH+EVERY, a coalition of businesses that are in favour of harm-reduction strategies.

Thomson has years of experience working in both Alberta and British Columbia.

He has compared the number of reversed overdoses at Safeworks, a supervised consumption site in Calgary, toxicity levels in drugs seized and tested in Alberta, and the number of poisoning deaths in the city to see how they might impact one another. He uses data from this particular site because it is accessible to the public dating back to 2017.

“At Safeworks, we hit a peak of eight per cent of people walking through those doors experiencing an overdose back in December of 2021, which also coincided with the peak of our drug toxicity deaths in Calgary,” he told CTV News Edmonton.

“Since that point, we’ve dropped down below three per cent and even lower than that now in terms of the overdose rate at Safeworks.”

He says that the number of reversed overdoses at the supervised consumption site fell alongside the number of drug-poisoning deaths throughout the year.

A family doctor who practices in Edmonton’s core and cares for people who use drugs says there are many possible reasons why drug-poisoning deaths are decreasing, including seasonal fluctuations and stabilization in drug supply.

“There may just have come a point where a lot more people of risk aren’t around, so that’s certainly a possibility, as well,” said Dr. Ginetta Salvalaggio.

Salvalaggio says that it would be premature to credit a decrease in deaths to the Alberta government’s recovery-oriented care model.

“They haven’t subjected that (claim) to rigorous study. No one's released any data to demonstrate that,” she said. “Before we go making pronouncements like that, we better have evidence. I don’t see it.”

If the drop in deaths really is attributable to Alberta’s strategy, Salvalaggio would like to know why Alberta’s trends are mirroring those of other provinces with different policies.

According to data available by the Public Health Agency of Canada, Alberta, Saskatchewan and Ontario have seen opioid-related deaths trend similarly for the last six years, including most recently when all three provinces saw a drop in deaths in the first quarter of 2022.

Aitchison did not respond to CTV News Edmonton asking for data to prove that the decline in fatalities in Alberta was a direct result of the government's approach.

Instead, he provided a list of steps the government is taking, saying in part, “this includes work over the past three years to establish 8,000 new spaces, remove user fees, launch the Digital Overdose Response System (DORS), and offer same-day treatment with the award-winning Virtual Opioid Dependency Program (VODP).”

Thomson would like to see the provincial government include drug toxicity data to decide how to most effectively address the crisis.

“This is the sort of data we should be basing policy on, but instead, we’ve chosen a policy and now we’re trying to fit the data to justify that policy,” he commented.

Thomson says what’s needed most is a low-barrier, regulated supply.

“Worry about all the other interventions after," he suggested. "Let’s first focus on keeping people alive with regulated versions of the drugs they’re using anyway."

Dr. Salvalaggio says her patients, too, tell her that they are concerned about the level of toxicity in the drug supply, the lack of a regulated alternative, as well as the lack of access to community-based support.

“The social stability needed to access these services, the complete and utter lack of attention to housing, the disruption of encampments and so on,” she said. “You can’t be asking people to insert themselves into a pathway of care that was prescribed to them if you’re not providing them with any of the supports, even if they want that treatment.”

The number of drug-poisoning deaths in Alberta for September and October have yet to be released by the provincial government.