Vandalism in the form of a swastika was discovered on the Baitul Hadi Mosque in east Edmonton Tuesday morning.

The vandalism was discovered by a neighbour, according to Nasir Mahmood Butt, the imam at the mosque.

“It hurts,” said Butt. “Differences are always there, in the community and in the society, but to solve those differences, the way is discussion and dialogue… this is not that.”

He said Tuesday evening police believed the paint is the same that was used in other cases of vandalism in the area, but that it wasn't clear how long it had been there on the second storey of the building.

An Edmonton Police Service spokesperson confirmed on Wednesday it could have been painted as early as April.

"In April, two other similar incidents of hate vandalism were reported to the EPS within the same neighbourhood, on both a vehicle and a fence. Investigators believe the same suspect(s) may be responsible for all three instances," Cheryl Sheppard wrote in a statement.

"The EPS Hate Crimes and Violent Extremism Unit has been made aware and are being consulted; however, the investigation remains with divisional investigators at this time." 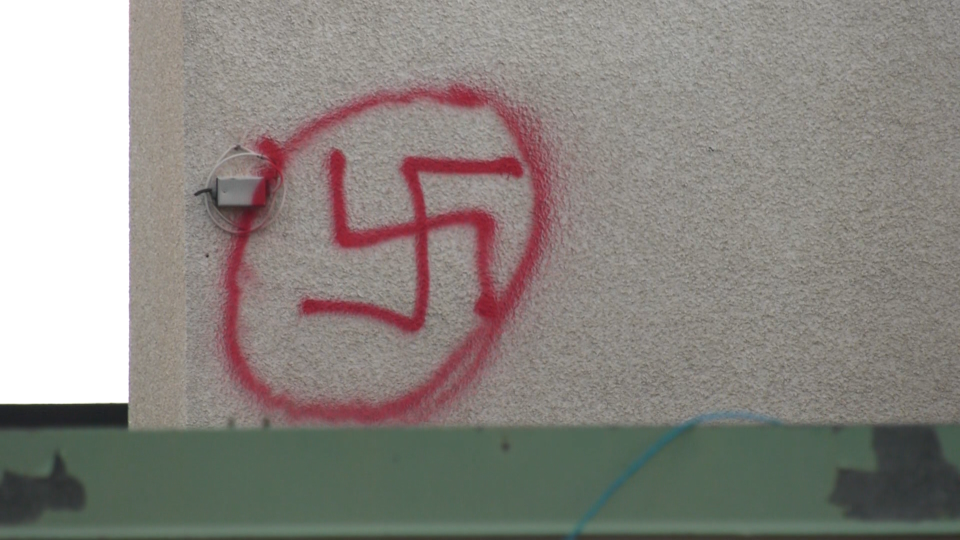 Premier Jason Kenney denounced the discovery, noting he hoped "the hateful vandals responsible for this are identified and face the full legal consequences."

Edmonton Mayor Don Iveson said he was disturbed and angered to learn of the vandalism: "These acts of ate must stop -- our Muslims community deserves to feel safe and welcome in our city. Full stop."

Ahmadiyya Muslim Jama'at Canada in a statement called on all Canadians to work together to combat anti-Muslim sentiment, which it says has grown since the attack in London, Ont.

However, Butt said there has also been an outpouring of support in the days since, too.

"Our neighbourhood, they send flowers and cards and letters and they showed love and sympathy with the Muslim community. They said, 'No problem, we are with you, you are not alone, we are always with you.' So these kinds of things always buck up the community and at the same time."

One week earlier, Alberta announced it would make up to $100,000 available through grants to cultural and religious organizations to do security assessments and install security equipment, like cameras or anti-graffiti sealant.

The Baitul Hadi Mosquemosque has been in the community for more than 25 years.