'It's a bummer': Edmonton chops 77 trees near cemetery for new sidewalk, bike lanes

'It's a bummer': Edmonton chops 77 trees near cemetery for new sidewalk, bike lanes

Crews were chopping and chipping in south central Edmonton Friday, as 77 mature trees were removed to make way for a new sidewalk and separated bike lanes.

For decades, the city-owned pine trees stood in the Pleasantview neighbourhood, separating Mount Pleasant Cemetery and 106 Street near 53 Avenue.

"It’s not just trees man, I don’t know," said an emotional Samuel Didderichs as he watched the work.

Didderichs walks the route to work. His grandmother is buried in the cemetery.

"I visit her grave and it’s like, it's just part of my life. But it’s like, oh, they’re cutting everything down, making way for bike paths, you know?" He said with a shrug of disappointment.

The tree removal is part of a neighbourhood renewal project.

The area’s city councillor says residents are right to scrutinize tree removals, but in this case, Michael Janz believes all of the proper consultations were done.

"I can’t imagine this decision was made lightly. I’ve heard from a couple constituents, and I’ll be engaging with them for more information, and certainly I’ll take it back to (city administrators)," he said in a Friday interview.

City staff have been talking to residents about the changes for nearly two years, and a spokesperson told CTV News Edmonton that there was no way to keep the trees and make improvements. 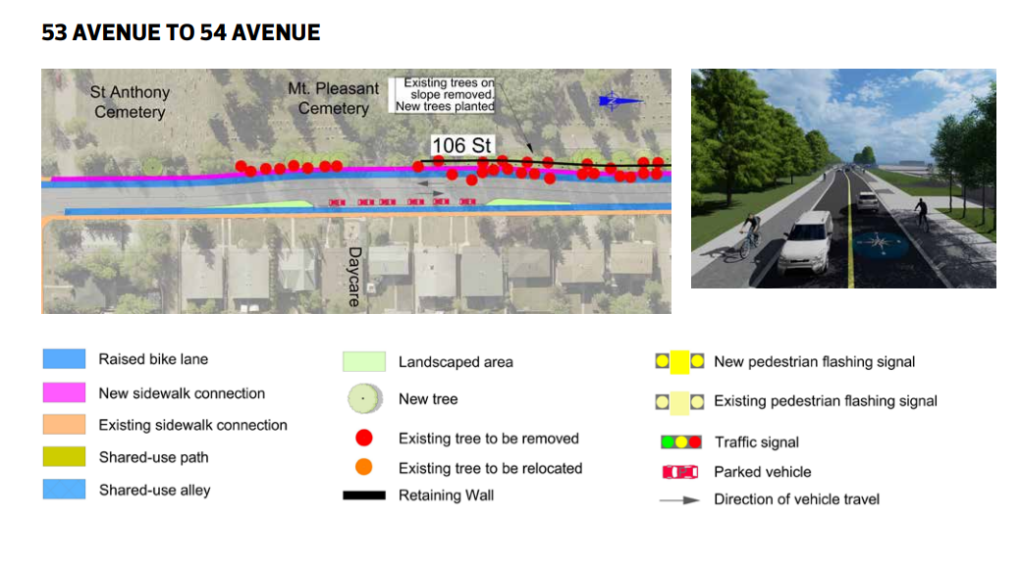 "The city values trees as a vital resource that provides numerous benefits to our communities, and we make every effort to preserve them wherever possible," Tannis Nygren wrote in a statement.

"Construction of new sidewalks and separated bike lanes along 106 Street in Pleasantview will contribute to a continuous separated walking and biking corridor from 51 Avenue to Saskatchewan Drive, ultimately leading to Edmonton’s River Valley."

The road already had a painted-on bike lane, but officials believe two separated lanes will be safer for cyclists.

The city also plans to plant 400 new trees as part of the Pleasantview revitalization work.

"It’s a bummer to take down the trees, but I'm hoping it’ll be beautiful in the end," said pedestrian Lauren Belter.

The new bike lanes could be in use as early as this fall.

Food prices in Canada will continue to escalate in the new year, with grocery costs forecast to rise up to seven per cent in 2023, new research predicts.

Bob McGrath, an actor, musician and children's author widely known for his portrayal of one of the first regular characters on the children's show 'Sesame Street' has died at the age of 90.

Former U.S. President Donald Trump faced rebuke Sunday from officials in both parties after calling for the “termination” of parts of the U.S. Constitution over his lie that the 2020 election was stolen.