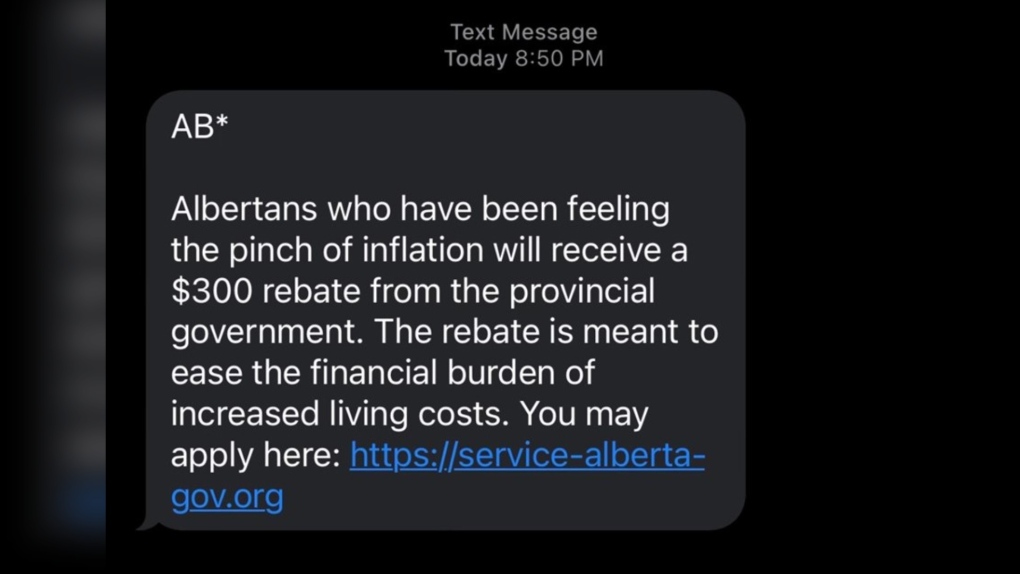 Scammers offering to make good on a government promise to dole out utility rebates are targeting Albertans, the NDP and UCP both warned on Monday.

In March, Premier Jason Kenney said $150 will be credited to all electricity customers in the province because of high prices.

Officials in his government say that relief will be paid out sometime in July, but photos of texts offering the payouts sooner are surfacing online.

“As you can imagine, Albertans who are struggling and desperate to pay their bills can be so easily misled into clicking these things,” NDP Energy Critic Kathleen Ganley said Monday.

Government social media accounts previously raised the alarm on May 4, but Ganley believes the UCP needs to do more to warn people and to clarify how the rebates will work and exactly when they will arrive.

“Scammers routinely target government programs for exactly this reason: to sow confusion. However, Albertans are now more likely to be caught up in this scam because of the UCP’s failure to clearly communicate its plans for delivering rebates,” Ganley said.

The NDP also wants the creation of a "digital public awareness campaign to educate Albertans about the risk of rebate scams as soon as possible."

A UCP press secretary declined to provide an exact date for the rebates on Monday, but said that officials are aware of the scam and have warned Albertans already.

"The electricity rebates will be going directly onto ratepayer bills, starting in July, and ratepayers will never have to apply or opt-in to receive the payments," said Taylor Hides, spokesperson for the associate minister of natural gas and electricity.

"Any Albertan that believes they are a victim of fraud or suspected fraud should report it."

🚨Phishing scam alert🚨
If you’ve received this message offering an energy rebate, don’t click on the any of its links, or provide any personal or banking information - it’s a scam. The @YourAlberta rebate will be applied directly to bills, with more information coming soon. pic.twitter.com/6c5Y7ipKa8