'It's bananas': How performers are entertaining kids at Edmonton street fest

Phileas Flash is entertaining a group of kids at the Edmonton International Street Performers Festival by making a banana appear and disappear into a bag. But he's also peeling back the layers of how he does his craft.

“Street performing is an art form, so when the kids come down to Kids’ World  they can see the performance and how it works and really get a feel of what it’s like to be a street performer,” says Flash.

And that’s the idea of  Kids’ World, which has its own section aimed at the younger crowd. It’s set up to be a less intimidating experience for children who want to attend the festival.

“Kids’ World was developed in order to get away from the big crowds out there for parents who have smaller children,” says the site’s producer, Harvey Anderson. 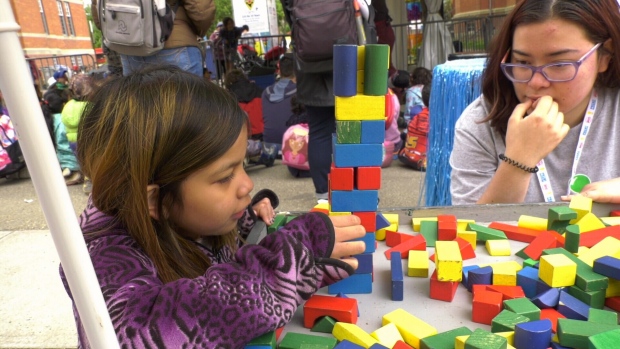 It features outdoors shows, as well as activities geared to children under 10. There’s everything from hula hoops, to building blocks, to a giant tic tac toe board.

“Most of the activities are hand-eye coordination, educational, balance and strategy,” says Anderson.

Phileas Flash is glad to pass his skills to the next generation.

And he hopes they too will be able to make magic with fruit.