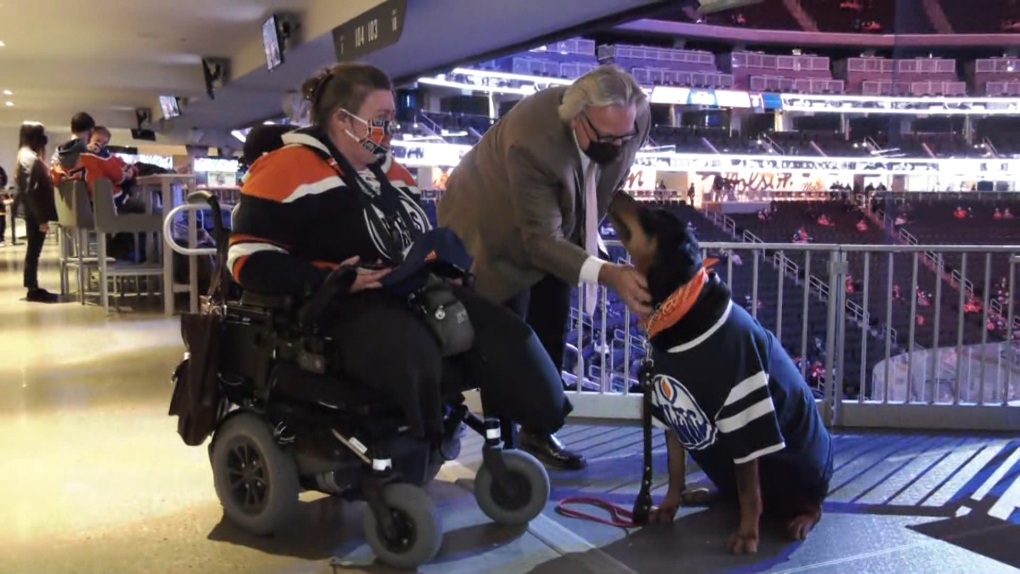 The Edmonton Oilers may have lost against the Vegas Golden Knights Tuesday night, but one lucky fan and her pup felt like big winners.

Marla Smith and her service dog Kuno were at the game, it was the first time the pair saw the Oilers play live.

Every Oilers game is live tweeted from Kuno's Twitter account. Kuno's tweets are so popular, a follower gifted the pup and his owner a pair of accessible tickets.

Tomorrow's the big day!
I'm going to go see my @EdmontonOilers play! We've never been to a live hockey game! A Twitter friend sent us tickets for accessible seats!❤🐾❤
Even tho humans can't eat during the game, I can still have Goaltreats!
I feel like the luckiest #Dog ever! pic.twitter.com/G9Z3DSL0gS

Hall of Famer Glenn Anderson even stopped by to see them before the game.

Smith has Complex Regional Pain Syndrome and has been working with Kuno since before both of her legs had to be amputated.

"He gave me a reason to get myself out of bed and into a wheelchair and out the door every day, and that's been the best thing for me. He goes everywhere with me," said Smith.

"He gives me a lot of confidence, I wouldn't be brave enough to come to the hockey game on my own."

Tuesday night's 50/50 draw raised more than $500,000 for Dogs with Wings, an organization that provides services dogs like Kuno to Albertans in need.