Axe Monkeys, an Edmonton business known for indoor axe throwing, dealt with a robbery that resulted in a $5,000 loss.

Dan Hudon, an axe maker also known as Dan the Axe Man, said he got a call at 5 a.m. on June 1 from an employee telling him Axe Monkeys had just been broken into. Hudon takes pride in the work that goes into carefully crafted axes, and feels the time lost is much greater than the financial loss.

“They broke in through the glass front door and basically went straight into my cabinet -- smashed it and cleaned me out,” he said. “They knew what they were coming in for.”

The axes were made by local axe crafter Dan, a senior citizen that has recently undergone a back surgery. 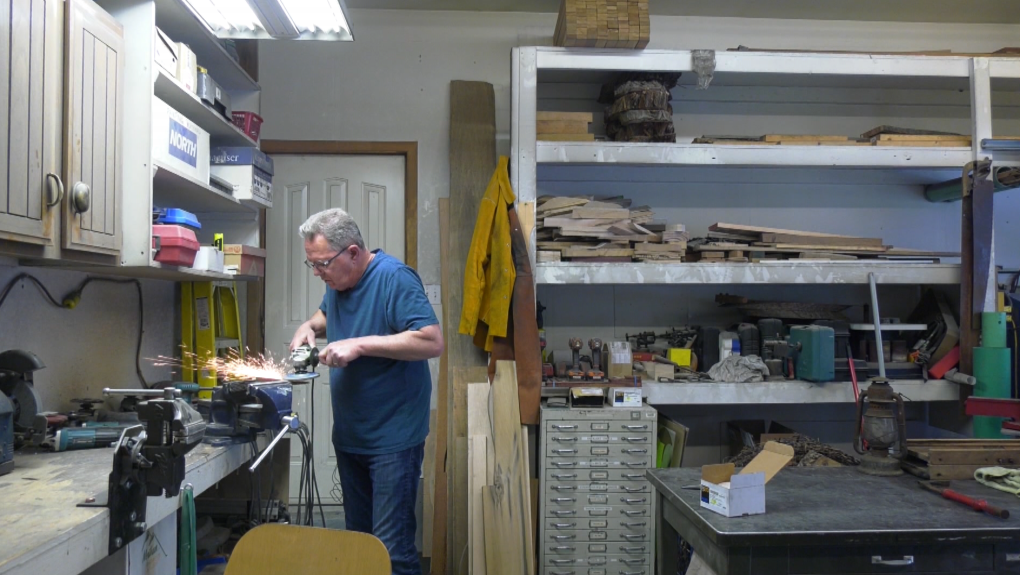 “He puts his heart and soul into it. He’s got six, seven, 10, 40 hours into some pieces and now they are all gone,” said Calhoun. “To have someone break into a business that has already suffered enough loss with the pandemic and with a senior citizen like him, it’s heartless.”

“He spends lots of time and lots of hours making things perfect. He does a lot for the fire department here in Edmonton,” said Calhoun, describing the axes as beautiful pieces of artwork.

The robbery is described as “unbelievable” by Facility Manager Adam Yates. He also believes the robbers knew exactly what they were coming in for, explaining the theft took only a few minutes. According to police, who were called to the site by alarms, the robbers were believed to be wearing gloves making it difficult to track down those responsible for the stolen items.

“We are a small business. We’ve had our hard struggles through this pandemic – you know, being open and then being closed,” said Yates.

The hand-crafted axes on the showcase were meant to supplement Dan the Axe Man’s income.Dan has an additional showcase at Clareview Windsor Plywood

There is a GoFundMe page for Axe Monkeys to raise money to cover the losses.

In an emotional and powerful speech at an International Holocaust Remembrance Day event in Ottawa, a survivor stressed the importance of remembering the millions of victims murdered by the Nazis during the Second World War and underscored the need to stand up against anti-semitism and hate.

An outside group may have accessed the online personal information of some Running Room customers in Canada over the last several months, the retailer says.

Members of Parliament are making their way back to Ottawa ahead of resuming sitting on Monday, as the city prepares to mark the one-year anniversary of the arrival of 'Freedom Convoy' protesters.