EDMONTON -- Dozens of hopeful adoptive parents have been left in limbo by the sudden closing of an Alberta adoption agency.

Linda Hoang and Mike Brown say they have spent $5,000 on the adoption process through Adoption By Choice.

It was their latest move in a series over six years trying to have a child.

After being diagnosed with unexplained infertility, and exhausting the other options in their budget, they turned to the established company.

"They had been around for 20 years – the longest running. We thought, OK, we feel like good about kind of this history," Hoang explained to CTV News Edmonton.

The company’s history actually accumulates to 31 years, ending – it was recently announced – at the end of July.

"The need for services to birth parents who are making an adoption plan has declined. Currently there are four licensed adoption agencies in Alberta," an announcement reads in part on the agency’s website.

Hoang learned of the news on Tuesday.

In total last fiscal year, 247 children were adopted in Alberta. However, the number of licensed agency adoptions in Alberta has fluctuated over the past five years between 63 and 72, save 2018-19 when there were just 44.

ABC facilitated a third of those private agency adoptions in 2018-19. 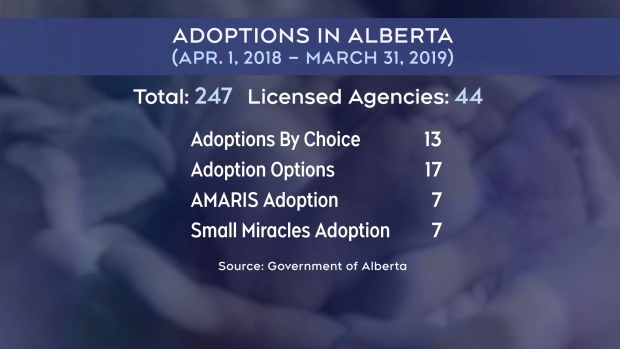 "We have two cats and two dogs and we love them, but we’ve always wanted to have kids. And we never thought that it would be this hard," Hoang said of her family’s latest setback.

"You don’t want to give up... But when it’s just one thing after another, it’s like you know, how much more?"

The Ministry of Children's Services offered its condolences to ABC clients and promised to help them transition their files.

"We are also conducting an extensive review of all adoption-related legislation and regulations in Alberta to ensure government processes aren’t a barrier to bringing families together."

ABC has told clients it will be contacting them to discuss their options. Hoang and Brown have a meeting next week.

With a report from CTV News Edmonton’s Jeremy Thompson