EDMONTON -- A community northwest of Edmonton is grieving after three children and their grandparents were found dead at the site of a house fire earlier this week.

Rochfort Bridge community members have been leaving items at a memorial at the site of the blaze since it tore through the home Thursday evening.

The fire caused such extensive damage, only a pile of charred rubble remains.

While the children's ages and names have not been released, the two adults have been identified as their grandparents, Marvin and Janet Gibbs. 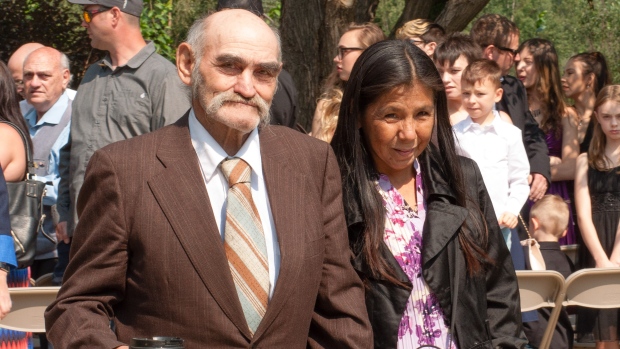 The children had been living with Marvin and Janet, who were married for seven years, family said.

"They loved each other very much. They were almost never apart," Marvin's daughter, Mysty Schallock, told CTV News Edmonton.

She said the children were her stepsister's kids.

Janet's brother, Dale Alexis, said it "feels like it's a dream to lose so many family members, just like that."

When the fire broke out Thursday afternoon, neighbour Robert Hook went to help.

"Went to the front door. Banged on it. Didn’t hear anything at all. Assumed everybody was gone," he said.

Fire crews were called, but didn't discover the first body until early Friday morning. Four more bodies were found later in the day.

"I know both of them lived for their grandchildren. They absolutely did," she said.

"They would've been outside playing."

"Every time I came here, I'd always bring them snacks. They liked cookies and juice."

Amidst the heartbreak, there is confusion: Marvin was a volunteer firefighter, and some wonder how he could be at the centre of such a tragedy.

"It's mind boggling," his daughter said.

"How (is) someone who is well trained and has helped other people out of the same situation (unable) to get himself out?" Schallock asked.

RCMP expect to provide an update next week.

Lac Ste. Anne County is encouraging those struggling to cope to reach out for support, and thanked neighbouring municipalities for their concern.

“The outreach has been nothing short of incredible, and underscores the reality that the only way through something as heartbreaking as this is together," the county's reeve, Joe Blakeman, said in a statement.

Rochfort Bridge is about 130 kilometres northwest of Edmonton.

With a report from CTV News Edmonton's Sarah Plowman