'It’s the right thing to do': Belmont Sobeys opening early for seniors

Belmont Sobeys was planning on opening its doors at 7 a.m. to allow senior shoppers an hour to pick up supplies in a calm, quiet environment before opening to the general public.

However, when a lineup formed outside before 6 a.m., MacLachlan and his staff were still prepared.

“We always do what’s right," MacLachlan said. "We got our team together and made sure that we were ready for them.”

Going forward, MacLachlan is opening his store an hour early every day to give seniors and other vulnerable members of the community a chance to shop for groceries during the COVID-19 pandemic.

“There was some hoarding, some panic buying and there’s really no need for that," he said. "There’s a stable supply and everyone’s going to get it. It’s a matter of getting caught up.

“I saw the seniors getting left behind; I thought it was the right thing to do." 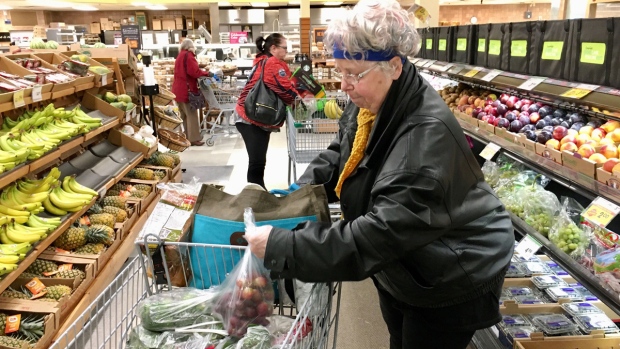 Beverly Maxwell calls the Belmont Sobeys her own and MacLachlan the friendliest manager in town. She arrived early to pick up items for herself and neighbours.

“Seniors are scared to go out. We don’t shop daily," Maxwell said. "We usually shop two weeks at a time. So it’s kinda throwing us all off to come into a store and see empty shelves.”

The Sobeys was well stocked except for toilet paper. MacLachlan was hoping for a fresh delivery last night — but no luck.

He also had extra help in the form of community volunteers who made sure groceries were safely loaded into vehicles and shopping carts wiped down with sanitizer.

Jay Downton is one of them. He usually writes about the Oilers. However, with his work life obviously quiet he calls it’s a no-brainer to help the community.

“We know how to find the silver lining during dark times. We’re doing our best with no hockey but more importantly we’re helping out people that need it the most.”

West end resident Joyce White hadn’t been out of her home to shop in two weeks. When she heard about this event, she made a friend drive her across the city to pick up fresh produce.

“Fabulous, fabulous. Absolutely, it’s just a gift," White said. "It’s actually my first time here. It’s a beautiful store and I think it’s very nice that they’d open it up for the seniors.”

MacLachlan plans to open his store every morning at 7:00 for “golden hour” as long as needed.