‘It was obvious the animals were suffering’, animal abuse charges laid in puppy mill case 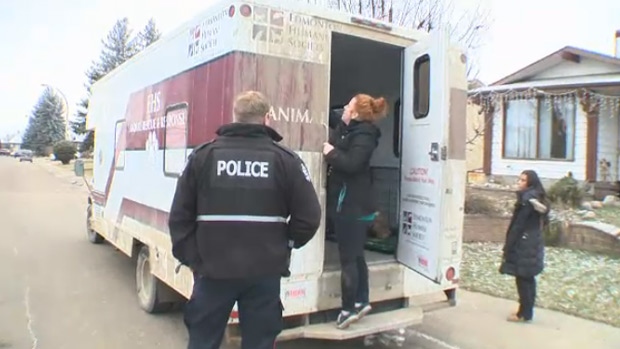 Edmonton Humane Society staff and an officer at the scene of a north side home, where a number of puppies were seized on November 30.

An Edmonton couple is facing animal abuse charges, after a number of puppies were seized from a north side home in late November.

Back on November 30, a woman – who asked to not be identified – recorded video of rescue workers removing a number of puppies from the north side home.

She told CTV News she had reported the operation, dubbed ‘Ivy’s Bullies’ after looking into buying a purebred puppy over Facebook – she worries for her safety, due the outcome of her interaction with the owner.

“It shouted puppy mill,” she said in an interview.

“As soon as it got to a question he didn’t like he became very belligerent, he called me a troll, he accused me of not being able to afford his dogs.”

“It was blatantly obvious to the layman, it was obvious that the animals were suffering,” Peace officer B. Grey said, calling the conditions the puppies were found in the worst she had seen.

“In general, you can see things such as urine burning and scalding on the feet, when it actually eats away at the skin and causes these raw burns for animals.”

In addition, Iverson is facing criminal neglect charges from police as well.

An investigation continues as well, the scale of the operation isn’t clear, and investigators are looking at properties outside the city that could be involved. Social media posts claim Iverson had imported puppies from outside the province.

“People are outsourcing these animals, they’re breeding for profit when we have shelters here that are full of animals,” Grey said.

The puppies are being treated and held as evidence at the Edmonton Humane Society, none of the seized animals had to be euthanized.

“The medical department first hand saw all these animals come in and saw the condition they were in, so to hear that something is going to come of it and these people were charged is a great thing,” Mandy Crawford with the Edmonton Humane Society said.

Investigators are asking anyone who bought a puppy from Ivy’s Bullies recently to come forward with information, specifically veterinary records that could point to health problems caused by neglect.

The maximum penalty if convicted is a $20,000 fine, and a lifetime ban from owning animals.