'It was unbelievable': Landlord describes condition of home where 55 cats were found

EDMONTON -- The owner of a house where 55 cats were found “living in deplorable conditions” says she was shocked at the state of the home.

“It was quite the grotesque situation, when we found out what was going on,” said Kristy Meyers.

Out of the 55 cats, 39 were euthanized and the rest are now in new homes.

Meyers and her family live two hours out of Edmonton, and have been renting out their Edmonton property for over 10 years.

She and her husband own multiple properties, but most are closer to their farm near Edson, Alta.

Meyers and her family weren’t living in Canada when their house became vacant, and says she had a property manager find new tenants for the home.

He found two women to rent the property: Kelly Jenner and Alisha Leclercq.

“They told us, I spoke to them on the phone, that they were refugees from Fort McMurray fires. And they were looking for a place to live,” said Meyers.

Meyers and her husband are volunteer firefighters in Yellowhead County, and he fought the Fort McMurray fires, so she says their story hit home.

The women had references, and paid their rent on time every month for three years, until this September.

Meyers said the tenants paid through e-transfer, and she was told she’d receive payment on Sept. 15, but the money never came.

That’s when Meyers evicted the pair from the home.

Meyers said when she showed up to clean the property on Oct. 1, and saw the notices on the door alerting her to the animals in distress.

“The yellow notices are the ones from animal control,” said Meyers. “The white one is from Alberta Health Services saying no one should be in the property anymore.”

She says they called police and found out the extent of the problems.

“They were helping animal control execute a search warrant to get into the property for these distressed animals, and when they got there the ammonia readings were so high in the home that they couldn’t go in, they had to call in hazmat first,” Meyers said.

“When hazmat got in there was a real drug problem within the home and it wasn’t safe for hazmat to be in, so a specialty unit with Edmonton Police Service had to go in and secure the home and I was told they ended up taking 50 cats out of the property.”

The last time Meyers says she was inside the home was in 2016, prior to the two women renting the home. The last time she was outside the property was in August.

The property looked cluttered, but Meyers says it didn’t raise any red flags.

When she walked into the home herself, wearing a respirator and hazmat suit, she says she was shocked at how bad the situation was.

“I can’t even put it into words. The pictures don’t even explain what was happening. It was unbelievable,” said Meyers. 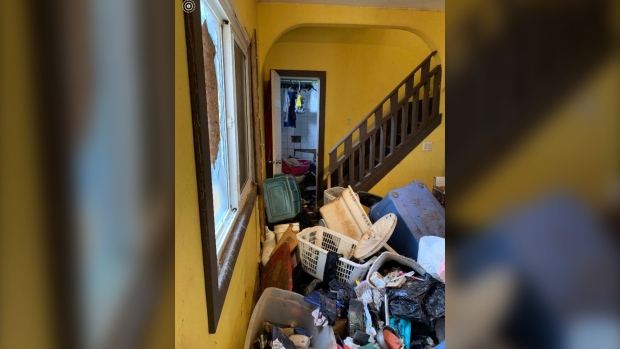 “You open the door and you’re overwhelmed by the smell of ammonia.”

She says the rooms were cluttered with garbage and furniture, and bloody syringes littered the floor.

“I’m surprised that anything could live in there.”

Meyers says the room upstairs in the home has feces two inches deep.

“It’s quite heartbreaking when you see animals living in that condition. It was pretty shocking.” 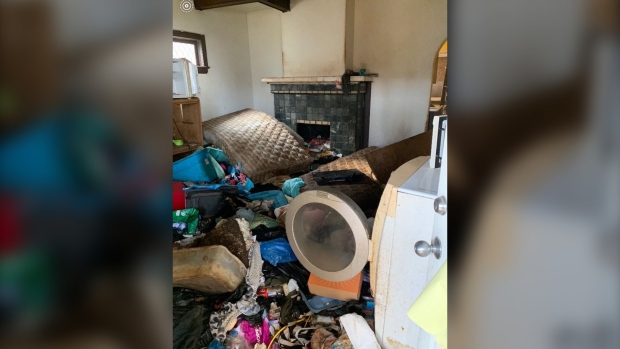 The RV on the property that also housed multiple cats belonged to the tenants according to Meyers.

Meyers says the property has been condemned by the city and they have two options, to hire a cleaning crew that specializes in biological substances to clean the house, or tear down and rebuild.

Their insurance company won’t cover the cost of either, so she says they have to cover the entire cost themselves. They estimate it’ll cost them $150,000 to $200,000.

She says they’re waiting for an assessment of the property to see what their next step will be.

“It’s definitely a lesson learned for us as landlords to make sure we are there more often, monthly I guess,” said Meyers.

“My advice to anybody is make sure you’re diligent in checking someone, especially if you’re inviting them into your property.”

Jenner and Leclercq each face three counts of two Criminal code charges: willfully causing pain, suffering or injury to an animal, and abandonment of an animal or willful neglect or failure to provide suitable and adequate food, water, shelter and care.