Edmonton's integrity commissioner has dismissed allegations by the president of the police association that city councillor Michael Janz breached council's code of conduct by posting criticism of Edmonton Police Service.

In a report made public Monday morning, commissioner Jamie Pytel concluded Janz only exercised his right to have an opinion on a matter of public interest, under which policing falls.

"I find that it is fair game for Council Members to let the public know their views on a matter that is coming before Council. This happens all the time and is part of transparent government," Pytel wrote.

"That does not mean they are not fulfilling their duties as a Councillor. In fact, in this instance, it is expected that Council will weigh in on issues of accountability and efficiencies in policing, which the Police Act confirms is within their mandate."

Janz called the complaint against him a "blatant attempt at intimidation intended to silence a new elected official."

The Edmonton Police Association, which doubles as a union, said no one was available for comment on Monday.

Elliott alleged it was inappropriate for Ward Papastew's councillor to write, retweet and like some posts on Twitter, which Elliott saw as biased, disrespectful to EPS members, and misleading about EPS.

"Councillor Janz is not a private citizen who is simply sharing his views on social media. He is now an elected official of the City of Edmonton and he is required to follow the Council Code of Conduct with an appropriate level of decorum, respect, and professionalism," he wrote in a letter to Pytel.

Elliott added it was "unfortunate" he felt he had to make the complaint, but said Janz had not responded to his request for a meeting.

In one of the posts Elliott found offensive, Janz shared a response from the city's ethics advisor regarding EPS' offer of a helicopter "fly along" during budget deliberations. 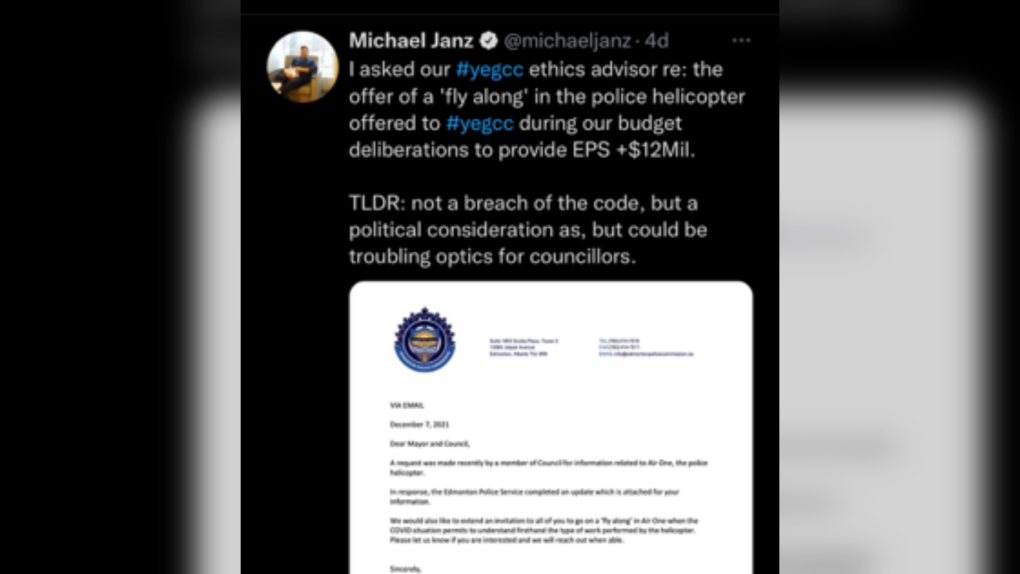 Pytel could not find the connection.

Several times, Janz retweeted posts made by other public commentators.

Elliott said Janz was interacting with "known critics of the EPS who are known for misrepresenting facts about the EPS and its members." 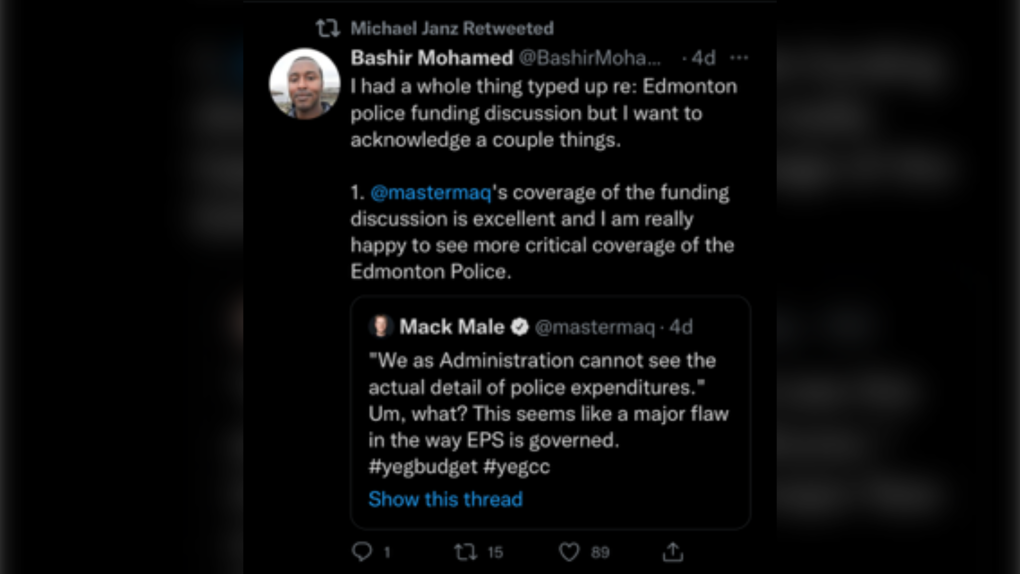 Each time, Pytel found the allegation "deficient" and noted Elliott was not accusing Janz himself of making a false statement.

"Generally, I did not find the communications in the posts went beyond the requirements of the Code, nor did I find there was support for the contention that they were misleading. On balance, they fall within the realm of expressing an opinion on a topic of public interest," she wrote.

The closest Pytel came to finding Janz out of line was when he retweeted commentary that police chief Dale McFee was fear mongering. 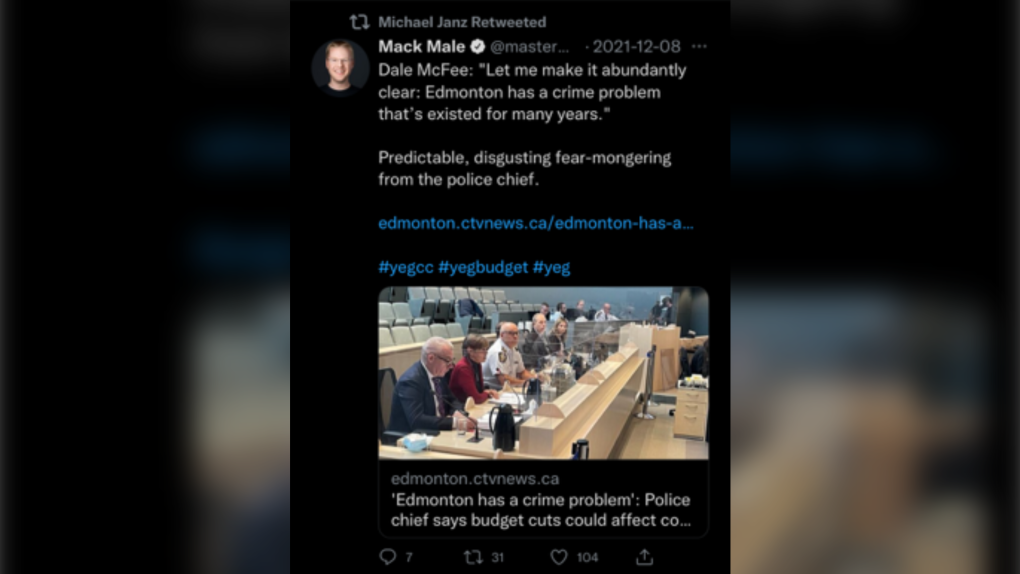 Pytel concluded the retweet fell within Janz's right to opine on a topic of public interest, but that "I do generally caution that sharing and liking posts can indirectly violate the Code if used as an indirect way to harass someone."

In another tweet, Janz called McFee a bureaucrat and said himself the chief was fear mongering. 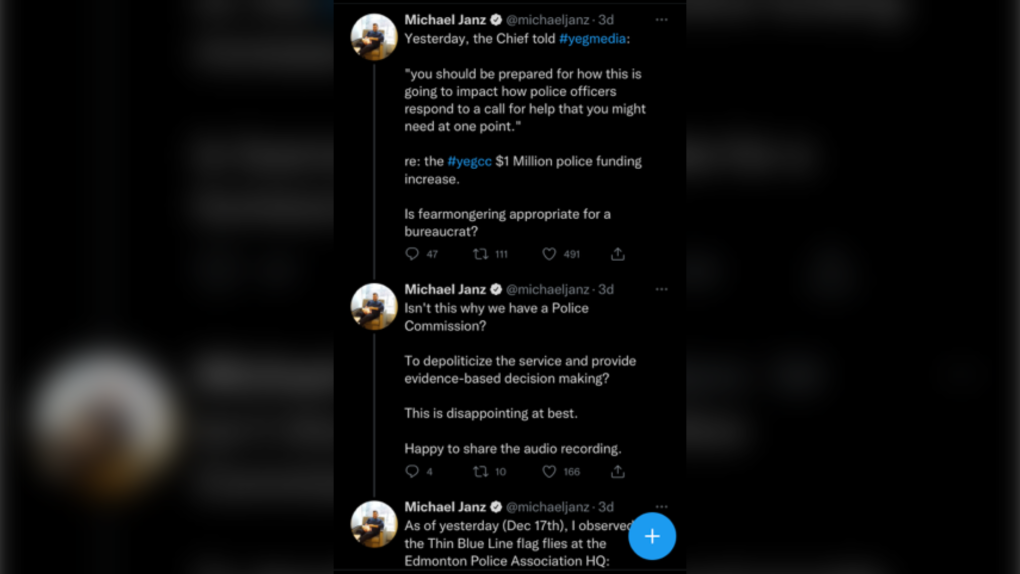 But, Pytel noted she has not received a complaint from McFee that he feels he is being harassed.

She also noted the chief and his police officers are not considered city employees for the purposes of the code of conduct.

NO WINNER OR LOSER: COMMISSIONER

Despite being cleared, Janz said he remained concerned about what he saw as an attempt to squash free speech.

"Many of the posts that I retweeted or shared were very legitimate political questions about budget, about police misconduct, about expenditures. These are questions that any elected official should feel free to ask," he told media Monday morning.

"The idea that in my first three months that I could be facing a code of conduct allegation for asking reasonable questions about police budgets and police behaviour is so beyond the pale to me."

He believes the complaint was a retaliatory tactic, as he was not made aware of it before media. However, Pytel did not find it had been made in bad faith.

"The outcomes are not to be viewed as wins or victories," she wrote in her report.

"I see democracy as the loser when a code of conduct can be weaponized to try and bring forward a complaint of this nature to intimidate elected officials," Janz commented.

He said he has asked Elliott to make a public apology, and hopes to see police be equal partners in making policing safer.

"The code of conduct is an instrument that council members follow to instill appropriate behaviour. It cannot be used as an instrument of intimidation or silencing legitimate criticism," he said in a statement.

Five of the 24 posts Elliott flagged as offensive referred to the Thin Blue Line flag or it being flown at EPA's office.

A Canadian website selling "The Thin Blue Line" products says the memorabilia commemorates "fallen law enforcement officers and to show support for Law Enforcement in general," however, it has also been associated with far-right and white nationalist groups.

Elliott accused Janz of linking EPS to one such group, the Proud Boys.

Pytel maintained her job was not to settle the debate of what the flag currently represents, but to determine whether Janz' comments breached the code of conduct.

She dismissed the allegations upon finding they did not.

Janz said Monday morning he had recently learned the flag had been taken down from EPA's headquarters.

It's not known when or why the flag was removed.

Janz hoped it was a concession by the police association.

"[The flag's] been very controversial and it's been weaponized against BIPOC communities and it very much symbolizes an us verse them between the police and community," the councillor said.

Complaint against Michael Janz by CTV News Edmonton on Scribd

Canadian writers, publishers and literary figures doubled down on the right to freedom of thought and expression on Saturday, one day after an attack on award-winning author Salman Rushdie that left him hospitalized and on a ventilator.