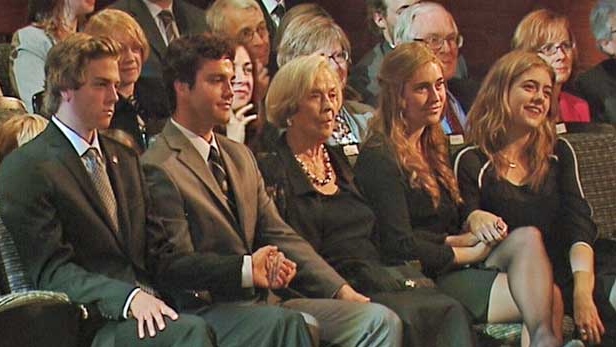 Lougheed was born in Forestburg in 1928, and later lived in Camrose. She studied at the University of Alberta, where she met Peter.

The province released a statement on her death on Monday.

“Jeanne was best known to Albertans as the wife of one of Canada’s most highly regarded Premiers, the late Peter Lougheed. By all accounts, Jeanne was both his best friend and closest advisor,” the statement reads.

“Jeanne continued to make an impact on the lives of Albertans long after Peter left public office. Her contributions were recognized with fellowships and awards, including the Queen’s Diamond Jubilee Medal. Her legacy has been memorialized in the Jeanne and Peter Lougheed Performing Arts Centre in Camrose, and the Peter and Jeanne Lougheed Building at the Banff Centre.”

Lougheed is survived by her children, Stephen, Andrea, Pamela and Joe, and her grandchildren.

Flags at the Alberta legislature will fly at half mast this week in her memory.