Jets storm back to beat Oilers 6-4 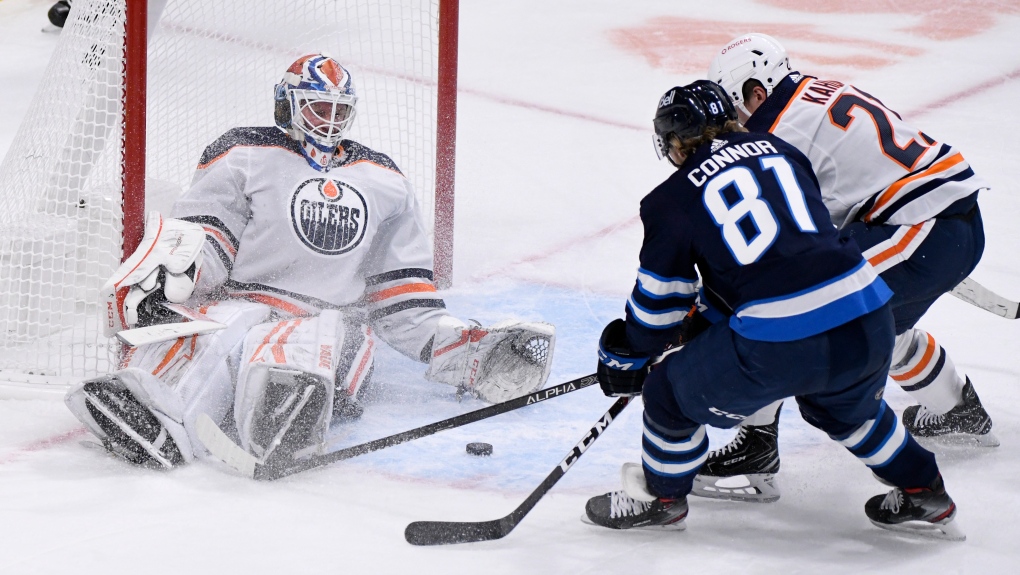 WINNIPEG - The Winnipeg Jets were left shaking their heads when Sunday's comeback was spoiled by a stunning, late collapse.

A similar script played out two nights later - only with a different final chapter.

Nikolaj Ehlers scored once and added three assists as Winnipeg rebounded from an early 3-1 deficit Tuesday with four straight goals, including three early in the third period, to defeat the Edmonton Oilers 6-4.

The Jets trailed 2-1 heading into the final 20 minutes some 48 hours earlier against the same opponent before surging ahead, but ultimately walked away with nothing after the Oilers tied things with four minutes left in regulation to set up Leon Draisaitl's demoralizing winner with 0.7 seconds remaining on the clock.

Winnipeg found itself in an a near-identical situation down 3-2 through 40 minutes Tuesday. This time, however, the Jets scored three times in a span of three minutes 27 seconds to secure a lead they wouldn't squander.

“It's the highs and lows of professional sport,” said Winnipeg forward Adam Lowry, who scored the winner to go along with two assists. “Sometimes it seems like you have an emotional letdown the next game.

“The first period wasn't our best, but we regrouped. We've got a lot of belief in our room and the firepower we have.”

Andrew Copp added two goals, including one into an empty net, and two assists, while Paul Stastny, with a goal and an assist, and Mathieu Perreault provided the rest of the offence for Winnipeg (5-2-0). Connor Hellebuyck made 22 saves.

“Our mentality of just staying in the battle,” Ehlers said when asked how his team shook off a tough loss and a rough opening 20 minutes. “And knowing that we're better than that.”

Connor McDavid and Ryan Nugent-Hopkins, with a goal and an assist each, Draisaitl and Adam Larsson replied for Edmonton (3-5-0), which has yet to win consecutive games in the all-Canadian North Division. Mikko Koskinen made 27 saves, while Darnell Nurse added three assists.

“Same type of story as the other night,” McDavid said. “We did a good job most of the 40 minutes, and then in the third period we kind of just let it get away.

“Able to battle back the other night. Not tonight. It's frustrating.”

The Jets tied it 3-3 at 3:19 of the third when Stastny weaved into the offensive zone and slid a pass for Ehlers to bury his fifth of the season - and a career-high fifth in as many games.

“I feel really good, which to me is the most important thing,” said Ehlers, who finds himself among the NHL leaders with 11 points. “My legs have been great. I want to be able to continue feeling great.”

Stastny then gave Winnipeg its first lead at 5:26 when he fished a loose puck out of a crowd in front and flicked his second beyond Koskinen.

The Jets continued the onslaught just 1:20 later when Lowry redirected his fourth off a pass from Derek Forbort to make it 5-3.

McDavid got one back for the visitors thanks to his fifth with 1:50 left on the clock and Koskinen on the bench for an extra attacker, but Copp iced it into an empty net with under a minute to go.

The line of Ehlers, Stastny and Copp combined for 10 points Tuesday in Winnipeg's sixth game in nine nights.

“We're reading off each other so well,” said Copp, “We've gone to the net hard, we've put the puck in the net on our opportunities, and have been able to change some games for us.”

Edmonton and Winnipeg will go head-to-head seven more times this season, with the next meetings scheduled for Feb 15 and 17 in Alberta's capital.

Playing the finale of a four-game road trip through Toronto and Winnipeg, the Oilers opened the scoring on a power play at 1:48 of the first when Draisaitl snapped his fourth of the campaign - and fourth in as many games - off the rush.

Winnipeg responded on a man advantage of its own at 5:14 when Copp banged home his third after Koskinen made a couple of good stops.

Edmonton nudged back in front 2-1 at 9:13 when Patrick Russell found Larsson at the point, and he beat Hellebuyck on a shot the Jets goalie will want back.

The Oilers, who came in with the NHL's 25th-ranked power play after finishing first in 2019-20, connected on their second straight man advantage to go up by two just 2:03 later when Nugent-Hopkins took a pass from McDavid and wired his fourth upstairs.

But the Jets countered once again three seconds after an Edmonton penalty expired when Perreault snapped his first past Koskinen, who has played every minute of his team's season with fellow netminder Mike Smith out injured, off a Lowry feed at 14:37 as the Oilers took a 3-2 advantage to the locker room.

Mark Scheifele hit the post for Winnipeg early in the second on a 2-on-1 chance as the teams played with a lot more tempo following that penalty-filled first.

Edmonton's Zack Kassian had three great opportunities to put his team back up by two, including a breakaway moments before the intermission, while James Neal had another, but the Oilers were unable to find the range.

Without pointing fingers, McDavid said misses like that can give a tired opponent energy.

“I've been on the other side of that,” he said. “When there's chances missed, it's almost like there's a goal scored for you.

“It's momentum they can build off.”

The Jets certainly did that in the third.

Notes: Winnipeg head coach Paul Maurice was behind the bench for the 1,607th regular-season game of his NHL career, tying him with Al Arbour for fourth on the all-time list. ... Edmonton hosts the Maple Leafs for two games beginning Thursday after the teams split a pair of contests last week in Toronto. ... Winnipeg now has three days off before resuming its seven-game homestand Saturday against the Vancouver Canucks.

This report by The Canadian Press was first published Jan. 26, 2021.