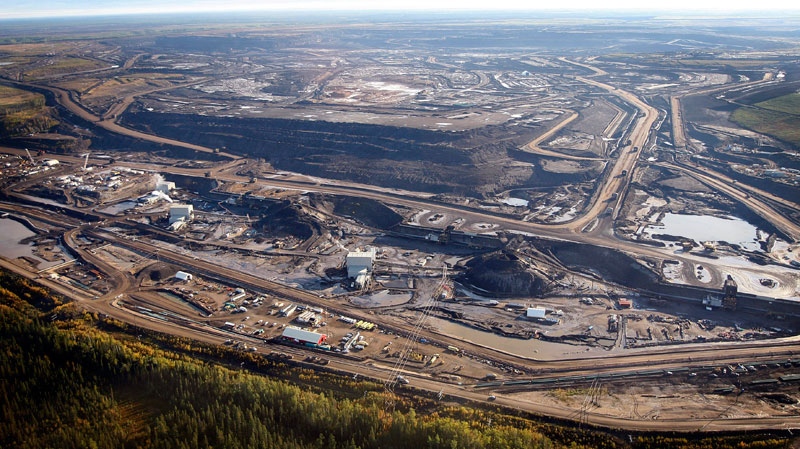 The Alberta oilsands are seen in this file photo. (Jeff McIntosh / THE CANADIAN PRESS)

EDMONTON -- Alberta’s 2020 budget is promising to "get Albertans back to work" through the continued corporate tax cut and other efforts to spur private investment in the province.

"Government policies can spur and support growth – and they can impede it –but they cannot create it," reads the plan, entitled A Blueprint for Jobs.

"Government’s best role is to offer a predictable and competitive environment that allows the private sector to thrive."

The plan outlines a continued reliance on the annual one per cent reduction in the corporate income tax announced in Budget 2019 along with efforts to boost employment in the agriculture, energy and tourism sectors.

"There is no great job for our government than getting Albertans back to work," said Finance Minister Travis Toews.

"Now at 10 per cent, Alberta’s corporate tax rate is the lowest and Canada and lower than 44 U.S. states.”"

"We are putting a growth and prosperity lens on everything we do to ensure the choices we make as a government support economic growth and jobs for Albertans."

It comes as Alberta continues to face high unemployment, with Edmonton and Calgary consistently having among the highest jobless rates among major Canadian cities in recent months.

It’s counting on improved market access for Alberta oil via the completion of two of three pipelines: Line 3, Trans Mountain and KeyStone XL.

The plan calls for regulating the industry “as lightly as possible” in an effort to create a more friendly environment for investors.

"Reducing red tape will underpin the productivity of our energy sector and its ability to create well-paying jobs for Albertans," reads the budget.

Without giving details on amounts or timing, the province says it intends to increase the loan and extend repayment period to the Orphan Wells Association and accelerate the reclamation of abandoned wells "in ways the prioritize job creation," according to budget documents.

The province is calling for "an investment, value-added and export growth strategy led by Government to increase the value of agriculture of Alberta."

"It continues to be a bright spot in the province’s economy, even during the recent economic downturn

"We have one of the world’s most productive primary agriculture economies and we enjoy an outstanding reputation for food quality," reads the budget.

Overall, the province is seeking to grow export in primary agriculture to 7.5 per cent per year.

Budget 2020 notes tourism has "immense potential" calling it "one of the fastest growing industries in the world."

"Tourism is one of the fastest growing industries in the world, with global traveller expenditures expected to double over the coming decade."

Along those lines, the government just finished consultation on a decade-long tourism strategy that will look to double tourism spending in Alberta, up to $20 billion annually.

The government is reviewing Travel Alberta’s mandate with an eye on moving it to a "destination management organization."

The move would potentially shift Travel Alberta from being a tourism promoter to working more directly with businesses to grow the province’s tourism industry.

The plan will "promote the province as a desirable destination to live, work, play, invest and learn," read budget documents.

The budget doesn’t give a specific number of tourism jobs the province is looking to generate but calls for closer work with industry and Indigenous community to expand the industry and employment.

The budget includes the Skills for Jobs Initiative to "ensure Albertans have the skills necessary to support our economy."

"This includes training and re-training programs that help unemployed or under-employed Albertans obtain the skills needed to succeed both now and into the future," reads the budget.

The visa will initially target foreign student graduates in the United States and includes a bridge to permanent residency.