'Keeping these people alive': A volunteer team works to reverse overdoses in Edmonton 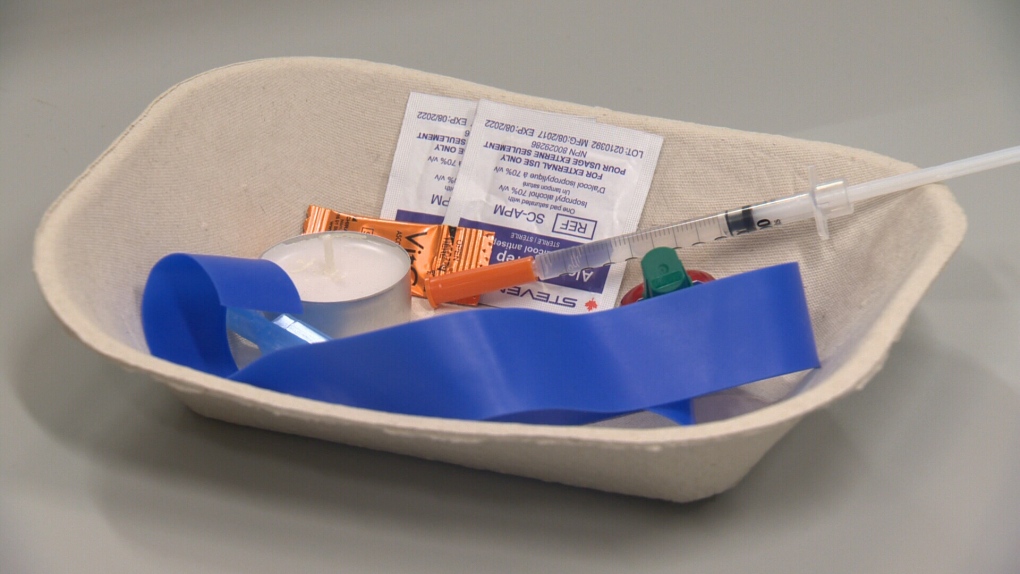 A woman winces as a volunteer crouches down, lifts up her dress and looks at a deep gash running along her right leg.

“You need to go to the hospital right now,” Angie Staines says, as the woman slumps against a wall in an alley on the northern edge of Edmonton's downtown.

“That is very severely infected.”

It's one hour into an evening shift for Staines and two other members of a harm reduction outreach team that distributes safe drug supplies and offers help to the city's homeless. They take a man, who was passed out on a muddy road, to a homeless shelter.

Staines, Alyssa Miller and Dave McLennan, the core members of Boots on Ground, also walk down two alleys behind Rogers Place, the home of the Edmonton Oilers hockey team.

They ask a row of people sitting on potholes, cardboard, concrete and grass if they need harm reduction supplies. They look for signs someone might be experiencing an opioid overdose.

Staines says the trio has been reversing multiple overdoses every week.

“With all that's going on with the poisoned supply ... it's really about just keeping these people alive right now,” Staines says, explaining that more powerful and tainted opioids are killing more people.

“That's what we're fighting for.”

The three began volunteering with Boots on Ground during the COVID-19 pandemic, pulling three to five shifts a week, after their regular jobs.

Staines is a full-time nursing student, Miller an education consultant and coach, and McLennan a tattoo artist.

They wander with heavy bags on their backs. Inside are dozens of needles, tin foil, straight shooter pipes and naloxone kits.They also hand out water bottles, cigarettes, snacks, condoms and sometimes socks, underwear and informational booklets. Some items are donated, others they pay for themselves.

Miller, who is the group's executive director, says she has never seen the overdose crisis this bad.

“The amount of overdoses that everybody is responding to and the wait-list for services is overwhelming an already overwhelmed system,” she says.

Staines adds that, more than the numbers, a quick walk through Edmonton's downtown shows just how dire the situation has gotten.

“Some nights you can come out here and you can see they're walking around like zombies.”

The drug poisoning crisis weighs heavily on her mind, she says, because her son is an addict who is currently on the streets. She sees him sometimes.

“He's a really sweet boy, but he's just struggling. The services out there just don't match the kind of addiction that is out there.”

Miller and Staines say initiatives by Alberta's government haven't been enough to treat the scale of the opioid crisis.

They say some in the homeless community have been saving themselves by picking up naloxone kits from Boots on Ground and reversing overdoses they also see.

The province has spent millions of dollars on recovery programs such as detox beds, a nasal naloxone distribution project, and an overdose prevention app.

But Staines says most of these programs are not reaching the people living on the streets.

They want the government to start a prescription drug monitoring program. The government has said it doesn't see offering safe supply as a critical intervention.

“The answer is not using taxpayer money to buy drugs to sustain any form of addiction. The answer is to treat addiction and support recovery so that Albertans with addiction can live happy, healthy, and productive lives.”

Elaine Hyshka, an assistant professor of public health at the University of Alberta, says there's lots of evidence.

“A (prescribed) harm reduction measure that is, in the immediate short term, designed to prevent people from dying from toxic drugs works.”

She adds that Health Canada funded a national evaluation of safe supply programs through the Canadian Institutes for Health Research because of the mounting evidence.

As the opioid crisis falls under layers of politics, Boots on Ground says its goal for now is to try to keep people alive on the front lines.

“I have no plans to quit,” Staines says.

“I live north of this core area and every day we hear like clockwork the sirens start,” adds Miller.

“We can see where they're going. It's just so wrong.”

This report by The Canadian Press was first published Aug. 16, 2021.