Kenney says budget deficit will be in $14B range, take years to balance 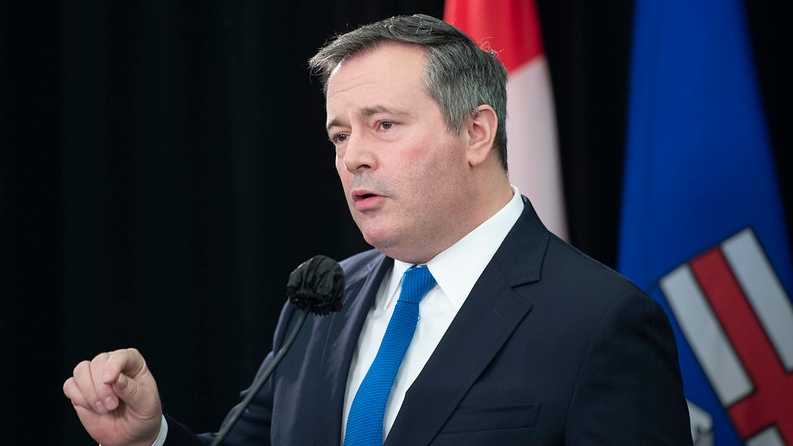 Alberta Premier Jason Kenney said Thursday's budget will have a deficit in the range of $14 billion, less than the most recent fiscal forecast. (Photo credit: Chris Schwarz/Government of Alberta)

EDMONTON -- Alberta premier Jason Kenney is pulling back the curtain a little more on Thursday’s budget, which he says will include spending restraint, cautious revenue projections and a deficit in the range of $14 billion.

“As much as I hate deficits, now would be the worst time to cut billions of additional spending when we need it in health care,” said Kenney.

“Yes, we’ll be borrowing. Yes, we’ll be spending on healthcare and investing in the economy. But no, we will not do that recklessly.

“Our focus in this budget is investing in healthcare and jobs.”

The most recent fiscal forecast made public in November pegged the province’s deficit at $21.3 billion.

Kenney, taking media questions at a non-budget related announcement Tuesday, said due to a significant recovery in energy prices the revised projection is “about $14 billion” and that Thursday’s budget would reveal a deficit “in that range.”

Despite a recent boost on the commodity front, Kenney said the province is going to be cautious on projecting revenues.

A year ago, many economists questioned the rosy outlook of US$58/bbl forecasted in Budget 2020 with a light-heavy differential of US$14.70/bbl, tabled a few weeks before the pandemic hit.

“Alberta governments of different stripes have often been criticized for trying to project their way out of deficit, we will not be making that mistake,” Kenney said.

Western Canadian Select closed just under $50/BBL on Tuesday, and has enjoyed a somewhat steady climb back to respectability after the price collapse in April.

The benchmark price of WTI, meanwhile, closed at just over US$61/bbl.

As far as "spending restraint" goes, Kenney did not provide details, but stated that balancing the budget won’t be possible as long as the pandemic keeps going.

“You will see continued efforts by Alberta’s government to operate more efficiently and that will be a kind of sub theme of Thursday’s budget.

“The reality is, with what we’ve been handed by COVID, we cannot realistically balance the budget in the next two years.”

The latest budget will be made public Thursday afternoon.