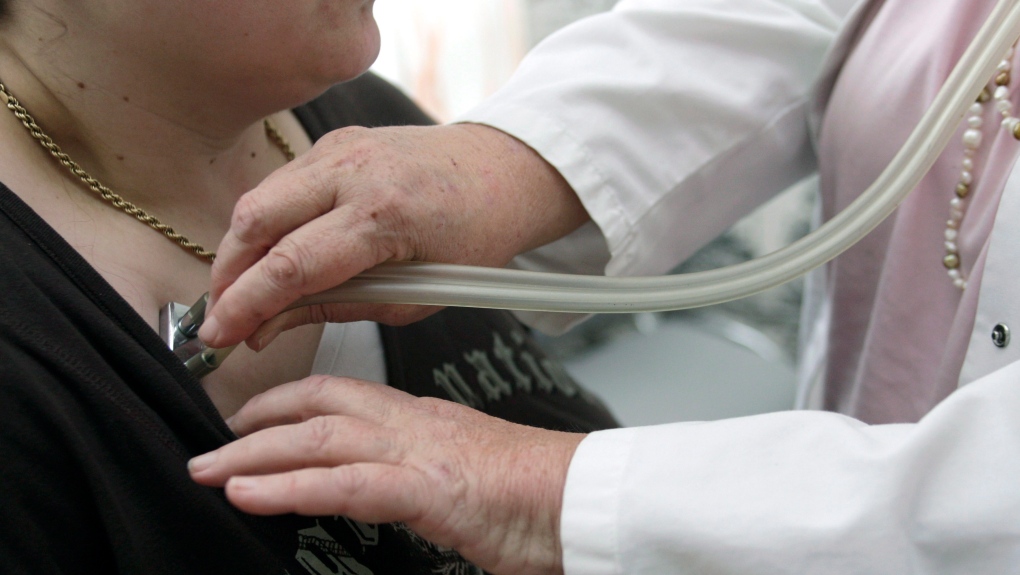 A doctor checks a patient with a stethoscope. THE CANADIAN PRESS/AP/Thomas Kienzle

EDMONTON -- As Alberta has recently been adding or restoring millions of dollars in pay to its physicians, Premier Jason Kenney says things will have to change once the COVID-19 pandemic is over.

“We're now facing a $20-billion deficit. So while we continue to maintain and in some cases increase physician compensation, we must manage it in the future,” Kenney told the house Friday during question period.

Kenney noted that provincial physicians are the highest paid in Canada and in recent years saw their pay rise “while Albertans' incomes were cratering.”

The United Conservative premier also rejected a renewed Opposition NDP call to fire Health Minister Tyler Shandro on the grounds Shandro has lost the trust of doctors by cancelling the master agreement with their bargaining representative, the Alberta Medical Association, earlier this year.

“This minister has taken on the difficult task of ensuring that we get more bang for the taxpayers' buck in the health system, and that's one of the many reasons I support him,” said Kenney.

Kenney's comments are the latest salvo in a battle now playing out in the legislature, courts, media and hospitals across the province.

The fight began in earnest in February, when Shandro used a new law to cancel the master agreement with the AMA.

Shandro then unilaterally implemented new fee and benefit rules that kept overall compensation at its current level of $5.4 billion, but involved changes some rural and family doctors warned could force them to close their practices or reduce service.

In the weeks that followed, as the full force of the COVID-19 pandemic hit, doctors pushed back, with some cancelling hospital duties. Shandro relented, cancelling fee changes for extra-long visits (which the AMA estimates was worth $200 million) and two weeks ago, rolled back on billing changes in order to keep rural doctors working in emergency and baby delivery rooms (worth $81 million).

The changes have been met with mixed results, with some rural doctors saying they will keep working in hospitals. Others say no, that without a negotiated deal any government announcement today can be erased tomorrow with the stroke of a pen.

Kenney's government remains committed to reining in doctor compensation costs, estimated to rise by $2 billion over the next three years if left at the current growth rate.

Shandro's office did not immediately respond to questions on where or how the government will find the savings post-pandemic.

But spokesman Steve Buick, in a statement, said: “We'll keep moving forward, including developing new ways of paying doctors (alternate relationship plans) to give them more choices of what's best for them and their patients.”

The AMA has disputed the government's salary figures, saying Alberta doctors rumuneration is not out of line with other jurisdictions.

Dr. Christine Molnar, head of the AMA, said rising physician costs are to keep pace with external factors, rising tech costs, an aging population and inflation - not because doctors are seeking a larger profit margin.

“We have not asked for an increase in rates,” said Molnar in an interview.

“We've actually offered to decrease the rates paid for each service to support the needs of Albertans.”

NDP Leader Rachel Notley said that after the COVID crisis, “we're going to have a whole 'nother crisis around physician compensation and physician, attraction, recruitment and availability as a result of the debacle.”

The AMA is suing the province for cancelling the master agreement, calling it a violation of charter-protected rights to collectively bargain.

This report by The Canadian Press was first published May 8, 2020.