Speaking to reporters on Monday, Kenney called the Vancouver-based company's decision "part of a pattern" of energy companies being scared off by political and regulatory hurdles.

"This should have been a straight forward an automatic approval," Kenney said.

"This decision was taken in large part because of regulatory uncertainty and endless delays, created by the national government."

He also later cited "the general atmosphere of lawlessness that we have seen taken holds part of our country and much of our economic infrastructure in the past three weeks." 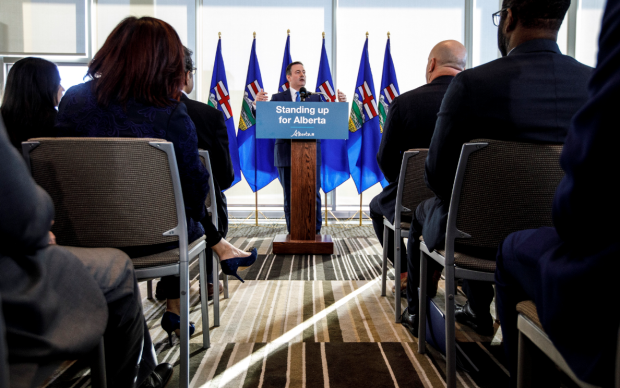 Kenney said his government will introduce Bill 1 which will be tabled during Tuesday's throne speech and will outline "new stiff penalties" for anyone who riots on or seeks to impair critical infrastructure.

The premier added his government is willing to invest directly in energy projects as a further means of restoring investor confidence.

On Sunday, a letter from Teck CEO Don Lindsay to the federal government indicated the Vancouver-based company was making the "difficult decision" to withdraw.

"Global capital markets are changing rapidly and investors and customers are increasingly looking for jurisdictions to have a framework in place that reconciles resource development and climate change, in order to produce the cleanest possible products," the letter states.

"This does not yet exist here today and, unfortunately, the growing debate around this issue has placed Frontier and our company squarely at the nexus of much broader issues that need to be resolved."

Kenney has blamed Ottawa, saying dithering by Prime Minister Justin Trudeau's government on approving the project, coupled with recent rail blockades by protesters of a natural gas project in B.C., have made investors think twice about Canada.

"Yelling at the federal government and saying 'geez get out of our way just let us go back to our wild west way of running things', is not going to create any more investor certainty," said Notley.

With files from Dan Grummett, Alexandra Mae Jones and the Canadian Press