Kenney: Tougher mask law would create a 'backlash' and cause some rural Albertans to unmask 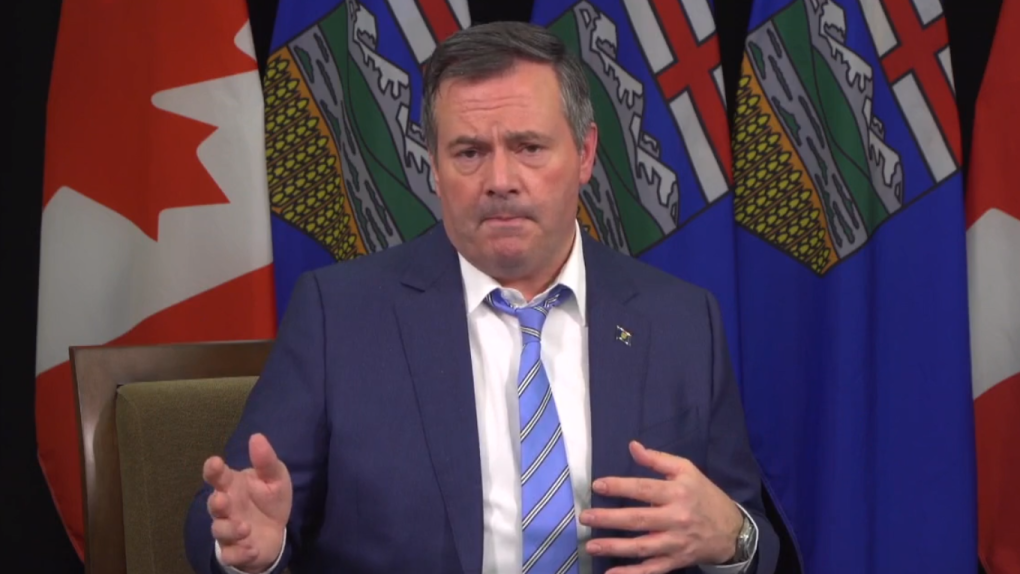 EDMONTON -- Alberta Premier Jason Kenney clarified his refusal to order a province-wide mask mandate Wednesday night by saying that he doesn't want to turn Albertans into "lawbreakers" or encourage people to uncover their faces in acts of defiance.

Kenney made the comments while taking questions from UCP members and other Albertans on Facebook.

The province added masking restrictions Tuesday in an effort to slow coronavirus spread – but Kenney stopped short of ordering masks for all Albertans – something every other Canadian province has done.

"Imagine you got a couple guys working in a big barn way up in the M.D. of Opportunity, hundreds of kilometres away from the closest COVID hot zone... do you really think those guys are going to put on a mask because I ask them, or tell them to? Do you think the RCMP is going to go out and write a ticket?" Kenney said in response to a questioner who said it was "ridiculous" Alberta doesn't have a full mask law.

MASKS RECOMMENDED, BUT NOT MANDATORY EVERYWHERE

Hinshaw has been recommending masks for months, and many municipalities in the province have passed their own masking bylaws.

The province's website recommends mask use when people are indoors with people they don't live with.

"Wearing a homemade or non-medical mask in public is another tool to help prevent the spread of COVID-19. It hasn't been proven that masks protect the person wearing it, but it can help protect people from being exposed to your germs," Alberta.ca reads.

Kenney said provincial mask restrictions in Edmonton and Calgary announced Tuesday address where 83 per cent of cases currently are – but said two thirds of Alberta hospitals are currently free of coronavirus.

The premier said a mask bylaw would create a "backlash" from rural Albertans, referencing a recent conversation he had with an UCP MLA whom he didn't name.

"He said a lot of folks would take it off the moment the government tells them to wear it. So why would we do something that becomes counterproductive? I think we need to exercise a bit of common sense in this," Kenney said.

"I really don't think it makes any sense to turn tens of thousands of people into lawbreakers simply because, for example, they're not inclined to wear a mask on their farm," he added.

Last week the official opposition NDP called for a mask mandate for all "enhanced areas" of Alberta.

The NDP also stopped short of saying it should be province-wide but accused the premier of pandering to his base instead of listening to experts.

"Masks don't close business, they don't infringe on people's freedom. They are a simple and low-cost way for every Albertan to help reduce the spread of COVID-19. But we know that several UCP MLAs promote anti-mask conspiracy theories, and clearly Kenney was too cowardly to stand up to them," Health Critic David Shepherd said.

A full list of coronavirus masking recommendations can be found online.

Defiance of church near Steinbach, Man., coming at a cost to neighbouring church

Canadians age 85 and older account for over half of excess deaths amid COVID-19: StatCan

ICU doctor's COVID-19 warning: 'This is what you'll see at the end of your life'