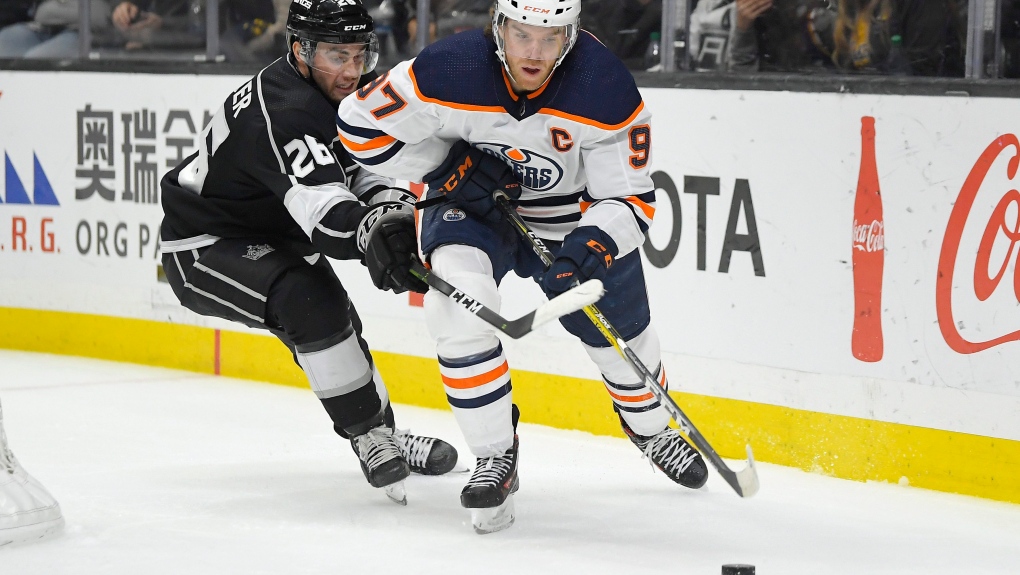 The Los Angeles Kings will need to start narrowing the gap with the top teams in the Western Conference if they expect to eventually make a playoff run.

The Kings didn't capitalize on their recently completed seven-game homestand, so they'll attempt to turn things around Sunday evening on the road, facing the Oilers in Edmonton.

Los Angeles went 1-4-2 on its homestand, which concluded with a 3-2 loss against the Pacific Division-leading Calgary Flames on Thursday. After facing the second-place Oilers, they hop to Vancouver the following night to take on the last-place Canucks.

The Kings are 3-0-1 in their past four away from home.

Thursday's loss dropped the Kings to 4-5-4 in one-goal games this season. They've been on the losing end of the past four one-goal games.

"It's a tough time right now, because if you're bad, you're really bad. You can go after the group and fix things, but we're so close," Kings coach Todd McLellan said. "It's just one small mistake that costs you. We've got to get on the other side of that small mistake."

They'll likely carry a sour taste into the opener of their six-game homestand against the Kings. The Oilers lost to the Seattle Kraken 4-3 on Friday, ending a three-game winning streak.

The Kraken are navigating through their season as a first-year expansion team and have recently surged out of the cellar in the Western Conference.

"This was a bit of a disappointing one, we didn't play our best," Oilers defenseman Tyson Barrie said. "We'd like to be better in a lot of areas."

"Couple too many penalties and too many turnovers," Tippett said. "That would be areas that we could fix."

Edmonton is 9-0-0 when scoring first this season and when leading after the first period.

Oilers' goalie Mikko Koskinen should be well rested when he presumably starts in goal against the Kings. He hasn't played since Wednesday when he made 32 saves in a 5-2 win against the visiting Pittsburgh Penguins.

The Oilers could also be getting some reinforcements back among their defensemen.

Cody Ceci was placed in the NHL's COVID-19 protocol on Tuesday and is a possibility to return.

Darnell Nurse has missed the past six games with a broken finger but also is nearing his window to return.

The #Oilers have activated defenceman Darnell Nurse ahead of tonight's game against the Kings.#LetsGoOilers pic.twitter.com/gOsExPWI1R

No matter who's in the lineup, Los Angeles defenseman Alex Edler said the Kings will try to keep things simple and stick to their style.

"It's pretty simple," Edler said. "Play aggressive, try to be on them, get our forecheck going to create turnovers."

Prime Minister Justin Trudeau and Health Minister Jean-Yves Duclos will be providing an update on the federal government's COVID-19 response this morning.

'Pure evil': How the pandemic has given rise to online child exploitation, livestreamed abuse

Attempting to curb COVID-19 through mandatory travel testing like 'trying to stop mosquitoes in the summer': expert

Attempting to curb the spread of COVID-19 through mandatory arrival testing at the border is like 'trying to stop mosquitoes in the summer,' warns one expert who says the federal rule is diverting sorely needed testing resources from provinces.

Major international airlines cancelled flights heading to the U.S. or changed the planes they're using Wednesday, the latest complication in a dispute over concerns that new 5G mobile phone service could interfere with aircraft technology.

French actor Gaspard Ulliel, known for appearing in Chanel perfume ads as well as film and television roles, died Wednesday after a skiing accident in the Alps, according to his agent's office. He was 37.

Disgraced Canadian fashion mogul Peter Nygard, who police say faces charges of sexual assault and forcible confinement, will learn Wednesday whether he will be granted bail.

Study suggests 'nocebo effect,' not jabs, could be behind two-thirds of COVID-19 vaccine reactions

A new study involving a systematic review of COVID-19 vaccine trials suggests that the negative version of the placebo effect may be behind COVID-19 vaccine side-effects like headache and fatigue, and not the vaccines themselves.