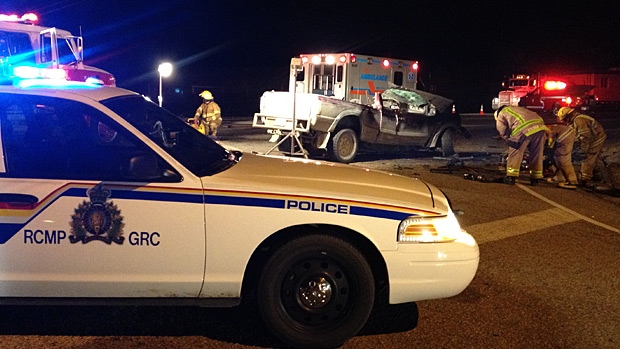 One person was taken to hospital with serious injuries after a two-vehicle collision on Highway 20 and Aspelund Road near Sylvan Lake at around 9 p.m. Saturday.

A 24-year-old man from Lacombe has been charged, after a collision near Sylvan Lake sent a man to hospital where he is now in a coma.

RCMP say the collision occurred around 9 p.m. on Friday on Highway 20 at Aspelund Road north of Sylvan Lake.

It is alleged that the driver of the pickup truck crossed the centre line and struck a Ford Ranger head-on.

The driver of the ranger, 41-year-old Randy Pinch of Breton, Alta., was airlifted by STARS to hospital in Edmonton where he is currently in a coma and listed in critical condition.

He is set to appear in Red Deer Provincial Court on Monday.