EDMONTON -- Students at the University of Alberta are holding a protest following an assistant lecturer's controversial comments denying the Holodomor was an act of genocide.

Dougal MacDonald caused controversy with a Facebook post he wrote calling the Holodomor, a famine that saw up to 10 million Ukrainian people die in 1932-33, a "myth."

The Holodomor was recognized in 2008 by Canada and nine other countries as an act of genocide.

But MacDonald denied that the famine was act of genocide perpetuated by the Soviet regime under Joseph Stalin.

That prompted outrage from members of the school's Ukrainian community, who called for MacDonald to be fired.

The university issued a statement saying while MacDonald's views didn't represent the school, he has a right to express his opinion as a private citizen.

The Ukrainian Students' Society, supported by other organizations including the Ukrainian Canadian Congress, began the protest at the U of A's main quad building at noon. 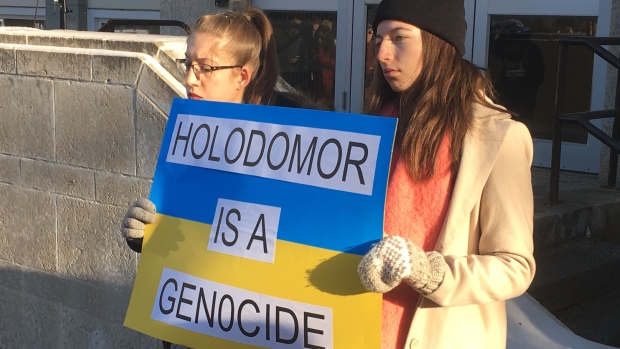