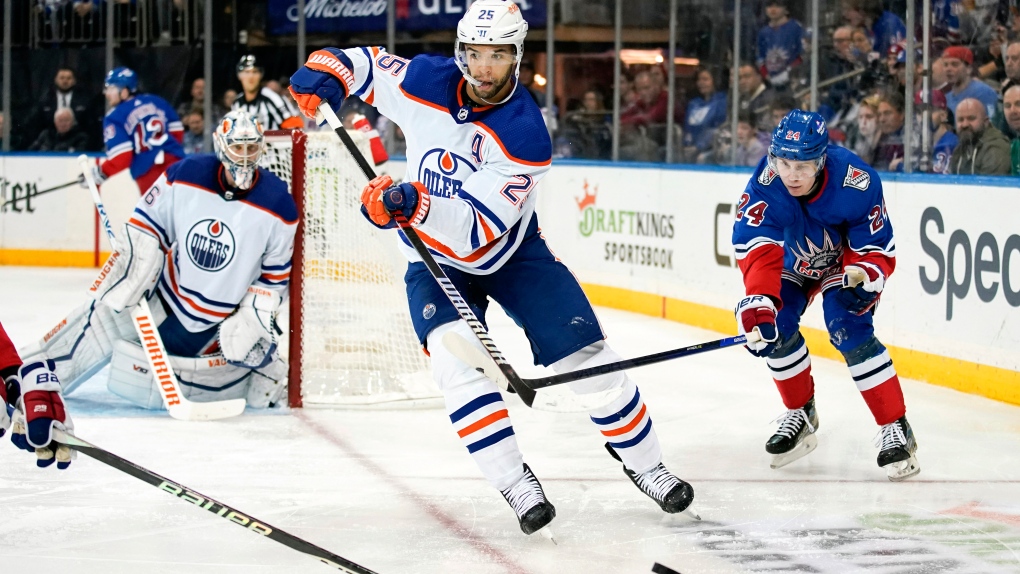 Leon Draisaitl scored a power-play goal with 2:02 remaining as the Edmonton Oilers stormed back from a three-goal deficit and beat the host New York Rangers 4-3 Saturday afternoon.

Nugent-Hopkins spotted Draisaitl streaking down the left side and threaded the puck through the slot and the play ended when he sped past Chris Kreider and scored into the vacated left side of the net.

Before Draisaitl scored his fourth game-winning goal of the season, Edmonton scored three times in a span of 5:42 in the third after the Rangers took a 3-0 lead on goals by Kreider and Julien Gauthier 33 seconds apart late in the second.

Evan Bouchard scored the first two goals of Edmonton's comeback before Dylan Holloway got his first career goal to tie it with 9:39 remaining.

Bouchard ended the shutout bid 4:39 into the third by ripping a shot from the left circle over Igor Shesterkin's shoulder. Bouchard then ripped a slap shot from the middle of the slot to make it 3-2 with 12:28 left

Following an errant clearing pass by Jacob Trouba and a slow New York line change, Holloway ripped a shot from the right circle for a 3-3 deadlock with 9:39 to go.

Lafreniere scored early in the first period as the Rangers had goals by Artemi Panarin and Braden Schneider disallowed by replay reviews and heard loud boos when the game ended. Panarin's goal was disallowed because of an offsides call and Schneider's tally was disallowed due to goalie interference.

Jack Campbell stopped 20 shots as Edmonton improved to 4-8-0 in its past 12 contests.

Kreider made it 2-0 in the second period when he played the puck from behind the left side of the net and his backhander through the crease appeared to trickle off Campbell's pads with 4:06 remaining. With 3:36 remaining, Gauthier was denied on an odd-man rush, but he corralled his own rebound, eluded Barrie and swept a wrister into the net.

The Rangers opened the scoring 2:20 in when Lafreniere crashed the net, positioned himself at the left doorstep and tipped in a pass from Adam Fox.

Ottawa tight-lipped on details as Canada, U.S. call out China over balloon

Canada announced that it had called China's ambassador onto the carpet as Ottawa and Washington expressed their disapproval Friday over a high-altitude balloon found to have been hovering over sensitive sites in the United States.

A federal government department has fired 49 employees who received the Canada Emergency Response Benefit while they were employed.