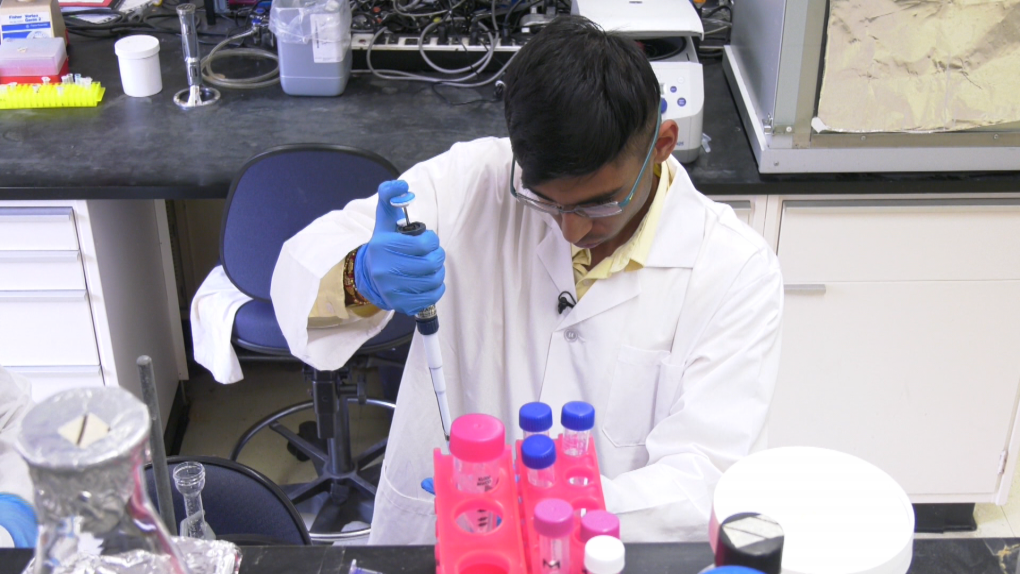 Navdeep Badhan works in a lab at the University of Alberta.

An Edmonton teen has earned the unique opportunity to learn the ropes of working in a university laboratory, before he even started his undergraduate degree.

Eighteen-year-old Navdeep Badhan won this year's Brain Bee neuroscience and mental health trivia competition and with it, a summer internship to work in a research lab at the University of Alberta.

"Just before entering high school my biology teacher introduced a competition called the Brain Bee and I've been taking part in the Brain Bee since Grade 9," Badhan said. "That's when I realized that since is something that I'm really passionate about."

The student extraordinaire has also taken part in history competitions, winning the Canadian National History event and others in New Jersey and New York, as well as publishing articles and participating in security council simulations.

"I represented the U.S. in a fast-paced security crisis committee (in a 1991 United Nations simulation)," Badhan added. "I learned so much more about history and the vast amount of lessons we've learned from our historical mistakes and events."

The past summer, he's worked in Joanne Lemieux's lab studying proteins involved in disease. While it was a big learning jump from high school to working in a university graduate-level lab, Badhan says he welcomes the challenge.

Getting the opportunity to experience working in a lab before even attending university is important, Badhan says, as it is helping inform his choice of degree.

"Starting young is really important in this case because the earlier you do, the earlier knowledge you have regarding this field," he said. "(Plus), I actually have a headstart when it comes to operating many of the lab equipment."

Lemieux explained that after winning the Brain Bee trivia competition, Badhan had the choice of choosing what lab to do a six-week internship in.

"It's a really great experience in the lab," Lemieux said. "It may seem daunting at first, you come into a lab where you don't know how to do anything. However, we really take steps to slowly introduce them and show them the lab environment.

"Then quickly you see just how confident they become," she said, adding that Badhan has since worked up to having the confidence to work independently.

After recently graduating from high school, Badhan now has his sights set on completing his undergrad and is debating between a master's in biochemistry or going to medical school.

"There's still time," he said. "There could be lots of different career options you could choose, but for right now, those two are in my mind."

There's been a 20-year series of middleweight clashes in the parliamentary fight club - Chretien vs. Day, Martin vs. Harper, Harper vs. Mulcair, Trudeau vs. O'Toole - but nothing comes close to the slugfest now raging between Conservative leader Pierre Poilievre and Prime Minister Justin Trudeau.

The first teaser trailer for the long-awaited 'Super Mario Bros. Movie' is here — but a lack of Italian flair in Mario’s voice is leaving some fans feeling like they just got hit with a Koopa shell.

One of the Liberals' two affordability-focused pieces of legislation passed the House of Commons on Thursday, with all-party support. It is now off to the Senate for further consideration.

Canadians driving more, but 74 per cent don't know they should update their insurance provider: survey

A new survey has found many Canadians are driving more with the return to offices and workplaces, but most don’t know they should be reporting this change to their insurance companies, which experts say could cause issues down the line.

The Toronto Blue Jays have the largest increase in average attendance at Major League Baseball games this year, when compared to pre-pandemic numbers, a statistic fans hope will help the team's playoff push on Friday when they take on the Seattle Mariners in a wildcard series.

McGill University says it is investigating one of its instructors who allegedly called for the death of people participating in anti-government protests in the streets of Iran in recent weeks.