Oostendorp, of Edmonton, is on the spectrum with Asperger's, ADHD, and writing disabilities, but isn't letting that slow him down.

Despite this only being his second year on the slopes, Oostendorp has fallen in love with the sport and has risen above the competition for a spot on Alberta's alpine ski team.

In order to qualify, he beat his main competitor in Calgary by two-and-a-half seconds in the Special Olympics Alberta Winter Games, where he earned a gold medal and received the Male Athlete of the Year award from his teammates.

"What I love about the sport is that I can compete and not be just a time. That's the thing about Special Olympics — you're not just a time or a number," said Oostendorp. "You receive much more individualized support and the coaches are really good and the team — everybody is very friendly."

"This is only his third competition, which is crazy," said his mom, Kelly Oostendorp. "It's very exciting and overwhelming that this has happened so quickly. He's loved it so much, and devoted so much of himself to it... I can see why and it's because he's been so dedicated."

But skiing isn't his only passion: Oostendorp is also a talented Lego builder. 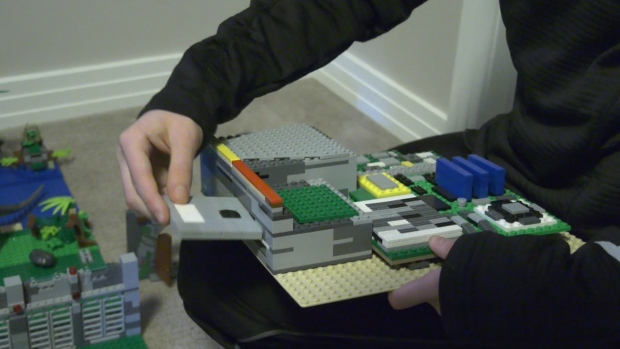 Oostendorp has built all sorts of types of Lego models, but really enjoys when he can veer away from the instructions and get creative.

He has built cars and helicopters, scenes from Jurassic Park, and even a model of a computer motherboard with a "working" floppy disk drive.

When asked what he loves about Lego so much, he quickly responded with a smile: "Because you can build basically anything with it, as long as you have the parts and figure out a way to construct it."