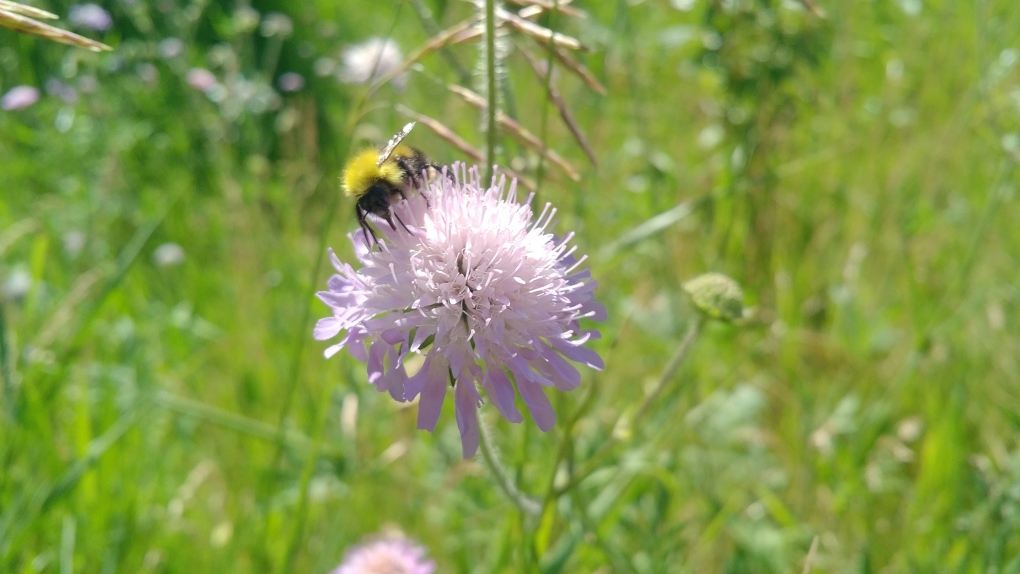 Photo of a bee taken in Terwillegar Park.

“Before winter arrives we wrap the bees by pushing all the hives together and wrapping them in insulated plastic blankets on the sides and on the top,” said Troy Donovan, beekeeper at MacEwan University.

The university has four bee colonies on the roof of its City Centre Campus, cared for by Donovan and his assistant Ian Anderson.

“We can’t look inside until spring arrives when we remove the blankets and move the hives apart.”

It’s part of the university’s urban beekeeping project, started in 2016, to emphasize the importance of increasing food security in an urban setting.

“We started with four hives the first year and then added two new hives the following year,” Donovan said.

“New hives usually start small and then build up over time. By the third year of the project we were working with six mature hives.”

Since the start of the project the colonies have produced more than 208 kilograms of honey which was packaged and sold.

Donovan said the school’s honey has a unique flavour.

“These flavour profiles change from year to year, depending on the urban areas the bees choose to pollinate. MacEwan honeybees have access to a variety of rose bushes, ornamental apple trees and several other plant varieties within a four-kilometre radius of the campus,” said Donovan.

The university will be offering tours of its rooftop bee colonies throughout the summer to educate people about the importance of pollinators in the community.