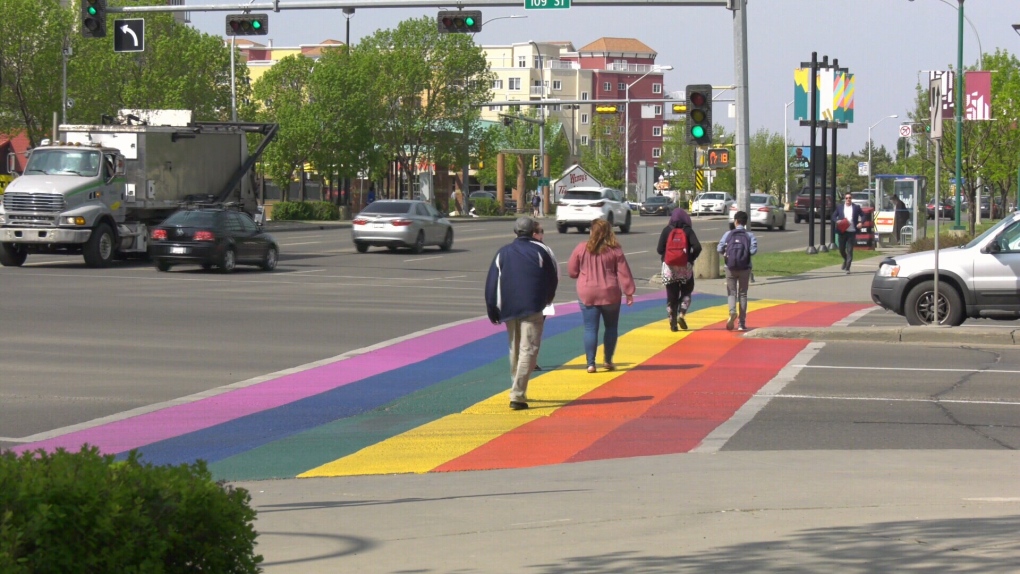 The rainbow crosswalk on 109 Street and 104 Avenue is considered to be the first of its kind at a major intersection in Edmonton.

Motorists and pedestrians around MacEwan University enjoyed a colourful sight Monday, as the campus gears up to celebrate pride month.

The university partnered with the City of Edmonton to paint a rainbow crosswalk on 109 Street and 104 Avenue. The crosswalk is considered to be the first of its kind at a major intersection in the city.

“We should build a community that includes everyone, and we should do more to support those that are vulnerable, those who maybe feel that they don’t have a voice, those that feel they aren’t included,” said MacEwan University professor Dr. Kristopher Wells.

The transgender pride flag crosswalks are also one of the first to be displayed by a post-secondary institution in Alberta.

“It’s important that we are celebrating as a university the diversity in our community,” said Wells.

In addition to the coloured walkways, rainbow and transgender pride flags were also raised over the university.

This June will mark the 50th anniversary of the Stonewall riots in New York City, which are considered the birth of the gay rights movement.