Making the pros: How often do Team Canada players make (and stay in) the NHL? 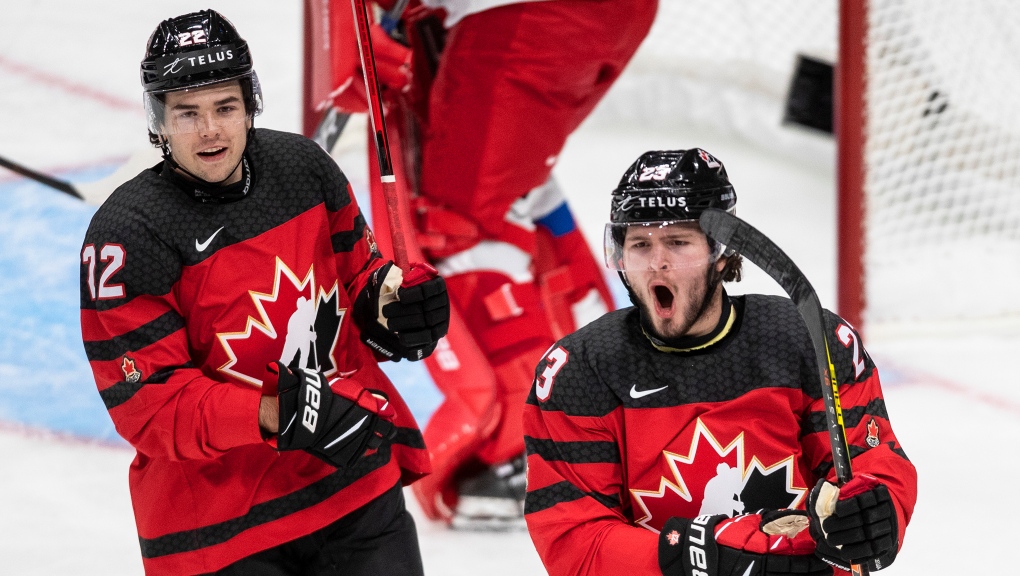 Canada's Jake Neighbours (12) and Mason McTavish (23) celebrate a goal against Russia during first period IIHF World Junior Hockey Championship exhibition action in Edmonton, Thursday, Dec. 23, 2021. Both Neighbours and McTavish had made their NHL debuts ahead of the tournament. THE CANADIAN PRESS/Jason Franson

Making the cut for Canada’s World Juniors team is a difficult task, and doing so seems to pave the road to future pro hockey success and National Hockey League stardom.

But being selected for Team Canada and making, and remaining in, the NHL aren’t the same thing.

Players can miss out due to injuries, attrition, or simply having a game that doesn’t translate well to the top pro level.

It’s also not hard to find generational, or even hall of fame, talent in players who didn’t make their World Juniors team, including Martin Brodeur, Martin St. Louis and Duncan Keith.

So, we already know that being on the World Juniors isn’t everything, but how often do those who represent our country during the holidays go on to NHL careers?

CTV News reviewed Team Canada rosters from the first official World Juniors tournament in 1977 as well as the number of NHL games those players went on to play.

Analysis is based on regular season game data up to Dec. 1, 2021. To allow for player development, the last five teams are omitted.

In short, history shows that if a given player makes Canada’s World Juniors team he has a strong likelihood of appearing in at least one NHL game.

About 91 per cent of Canada’s alums have managed to make at least one appearance, but longevity is another question.

Sixty-two players didn’t, or haven’t yet, made the NHL at all, and 10 players appeared in just one NHL game.

The average number of NHL games played was 448 or about 5 1/2 seasons.


A lot has changed since the first official World Juniors in 1977. Hockey is a more international sport, with more non-Canadian players competing for NHL spots even as league expansion opens up more potential jobs than even a decade ago.

Here’s what the data shows about how often Canadian World Junior alums made NHL rosters, broken down by decade.

About two-thirds of players (66 per cent) from World Juniors teams in the 1980s played 160 or more games (about two seasons for skaters) in the NHL. That figure slowly rose to over 70 per cent with teams in the 2000s.

Relative to playing 80 or more games (about one season), Team Canada has had a progressively higher ‘hit’ rate through the years: from 68 per cent in the 1980s up to 78 per cent in the 2000s. A similar rate is seen in the 2010s based on partial early data.

The ‘miss’ rate, players who played in zero NHL games, has fluctuated, but generally declined over the years, from more than one-in-10 players (12 per cent) in 1980s to less than nine per cent in the 2000s, or a difference of eight players.

Players from 2010s teams are still working their way through the system. Data from that team is presented but isn’t fully complete yet.

It’s long been known that goaltenders develop at a different rate than skaters, and long hypothesized that their pro trajectory is more difficult to forecast.

Goaltenders ‘miss’ (play zero NHL games) at a rate nearly twice as high as the average of all players.

While 80 games represents about one NHL season for skaters, it’s often closer to two seasons for netminders given the nature of the position.

Just over half, 55 per cent, of Team Canada’s goalies have appeared in 80 or more NHL games.

Forwards have been the best bet historically, with about three-in-four playing at least 80 NHL games, a rate slightly higher than for defencemen.

Of the top 25 Team Canada alums by games played, nine are defencemen.

Canada’s World Juniors teams are best thought of being made up as the best available players at that moment, but the realities of pro sports and young athletes mean that when the moment changes along with the level of competition, those players aren’t necessarily the best any more.

So while making Team Canada’s roster appears to give a player a very good chance of making his NHL debut, the future after that is much less certain.