Man charged with driving under the influence after fleeing, ramming into police

EDMONTON -- RCMP had to use a spike belt to stop a vehicle that was seen driving in and out of the ditch south of Edmonton on Saturday.

A possibly impaired driver was reported to 911 just before 5 p.m. The caller said the vehicle was driving erratically south on Highway 13.

The driver fled Wetaskiwin and Leduc RCMP when officers tried to stop them, and was followed by police.

At one point, the fleeing driver also charged police vehicles.

Eventually, the spike belt was used and RCMP say the driver purposely crashed into a parked police vehicle, forcing it into the ditch. 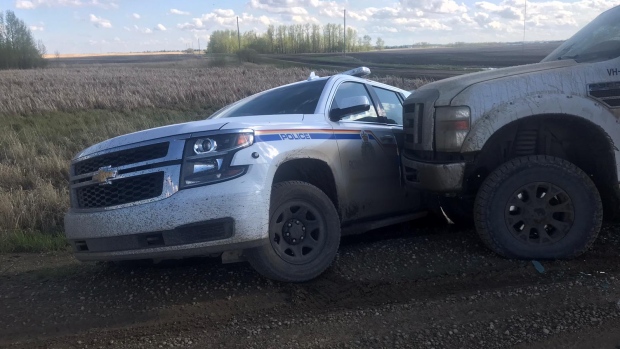 A man, 57-year-old James Cridland, faces eight charges including operating while impaired, dangerous driving, and assault with a weapon.

He has been conditionally released and will be scheduled to appear in court.

RCMP want to speak to two possible witnesses: drivers of a Volkswagen car and a white SUV.

They are asked to call Wetaskiwin RCMP at 780-312-7267 or stop in at the Wetaskiwin detachment.

The weekend marked the end of Canada Road Safety Week. RCMP throughout the province issued 1,700 speeding tickets more than 50 distracted driving tickets this year, and attended three fatal and 19 non-fatal injury crashes. RCMP reminded that it is their collective responsibility to keep the roads safe.